VIDEO: Bill Schmalfeldt Lies About His Relationship with Brett Kimberlin


More video from yesterday’s show (meaning February 20).  Toward the end, he engaged in a deep throated defense of Brett Kimberlin.  To put it in a little context, he was talking about a Tweet where someone referred to a “buddy” of his who went to prison.  Schmalfeldt logically deduces that they were referring to Brett Kimberlin and he goes on to address the claims that he is friends with, or associated with, Brett Kimberlin.

See if you can catch the contradiction in his statement:

Now there is a lot wrong there.  I particularly love the part where he argued that since he was defending Kimberlin, that we were therefore “persecuting” him, as though one followed the other.  As though we were not instead trying to get Kimberlin to face justice for the crimes he has more recently committed...

Nah, poor whiddle Brett Kimberlin was being persecuted.  Persecuted I tell ya!

But ignore that bit, and tell me if you can spot the contradiction, in his statement.  Listen again if you need too…

Well, here is the contradiction: early on, he claims he never met Kimberlin, never talked to him, doesn’t even know what he would look like except by old photos.  Now first, notice that by expressio unius he didn’t say anything about emails and the like.  But he is giving you the overall impression that he doesn’t really know this Kimberlin fella.

And then he tells us that Kimberlin is really trying to make up things better, to fight for social justice.  He says this twice, the second time speaking much more affirmatively about the good that Kimberlin is supposedly doing.

How on earth can he pretend to know that, without ever having met the man?  The only evidence that Kimberlin has ever in his life helped anyone but himself (and those he depends on, which is selfish in its own way) is that Kimberlin has said he has done so.  But since when does any “journalist” pretend that the word of a convicted perjurer amounts to anything?

Of course Schmalfeldt ignores the powerful evidence of at least him being allied with Kimberlin.  And his denial seems hard to square with this Tweet that we were able to screencap: 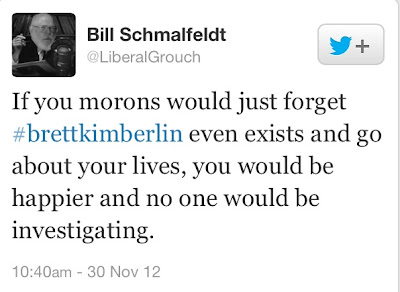 Is that what normal people do?  Harass complete strangers for the benefit of another complete stranger for no reason at all?  Or do you think maybe his claim he isn’t connected to Kimberlin is a bit of a lie?

And for bonus points, that tweet proves that his harassment, which he pretends to be an “investigation” is not for any legal purpose, but to get us to stop investigating and to stop reporting on, Brett Kimberlin.  This is precisely why Lee and John’s criminal complaints are designed to vindicate freedom of speech.

By the way, as a final thought, a few seconds later in that speech (he goes on quite a while about the martyrdom of Brett Kimberlin and himself), he then dives into ethnic stereotyping.  Yes, really:

But my takeaway question is what exact group is he stereotyping?  Italian Americans? Hispanic Americans?  Asian Americans?  I suppose the respective ethnic anti-defamation groups haven’t started protesting because 1) no one can figure out who exactly he has insulted and 2) no one listens to him anyway.  Seriously, I wonder if anyone is listening to his show besides conservatives wanting to listen to a member of Team Kimberlin flailing live, and his employers who are probably not terribly pleased with his performance as of late.

And let me say something else.  In my heart of hearts, I don’t believe that any person supporting me has done any of the above.  But if any of you have, stop it, and if you haven’t don’t start.
Posted by A.W. at 12:38 AM