The Scene That MUST be in a Justice League Movie...

Update: So now we are getting a Jawalanche!  But they entitled the post, Ministry of Boobies: Marvel Edition.

Marvel edition?!?!?!?!?  Everyone knows that Wonder Woman is a DC character.  Shame!  Shame!  They are hereby losing their nerd card!

Still the post did make me laugh, so there is that.

So, dear reader, this will be a frivolous post, because we can’t always make things deep or serious or whatever.

Nay, dear reader, it is The Atom (pictured right)...

...who has the ability to shrink.  According to this Wikipedia page, when shrunken down he retains the strength of a full sized human being and can scramble his molecules to make him extra strong, invisible or any number of cool things.  On the other hand in Justice League Unlimited, he just appears to have the ability to shrink down.

Justice League Unlimited, of course, was where the run that had been going since Batman: The Animated Series finally jumped the shark.  Previously, Batman: The Animated Series had actually won Emmys for the quality of its work and then Superman: The Animated Series came out, which was still good.  And then a Justice League show.  Unlike the recent and very excellent The Avengers: Earth’s Mightiest Heroes, which typically wrapped each episode up in half an hour, but also featured elements of a continuing storyline for its entire two year run to add depth, the Justice League made things deeper by making each episode a multi-part affair that would wrap up in typically three or four episodes and further you got to know a very small cast of characters pretty well.

And then Justice League Unlimited came out, with a cast of seemingly every DC superhero and storylines like when the characters were all turned into children.  Including Batman.  You know, because that wouldn’t wreck his coolness or anything like that.  And each episode was only half an hour, standing alone, with almost no continuity, so really there was no time for anything but the simplest plots.  So the show wasn’t very good...

...except for having in it the most awesome scene in any superhero show, movie or comic, ever.  It came in the episode entitled Dark Heart (season 1, episode 10, just after the fifteen minute mark for reference purposes).  The story was about how an alien super weapon landed on Earth which would consume the entire planet and every person on it, if left unchecked.  So Ray Palmer, a.k.a. the Atom, needed to get to the “dark heart” of this super weapon in shrunken form to destroy it.  And standing in his way is a swarm of robotic monsters of various kinds.

So Wonder Woman volunteers to carry him, holding him in her fist as he warns her not to close her hand completely, because it would crush him.  So were we about to be treated to seeing Wonder Woman beat her way through hundreds of robots one-handed while Superman was having trouble with two hands and his heat vision, cementing her awesomeness forever?  No, we were treated to something even greater, dear reader and I did my best to screencap the key moments on my phone.

You see Wonder Woman decides that she can’t do it with only one hand.  She needs both hands... 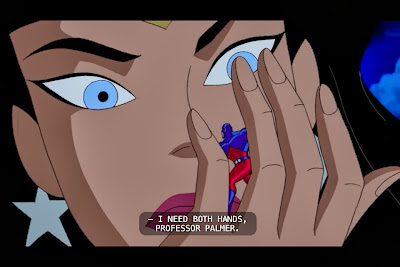 And so this happens (with apologies for showing the Netflix controls): 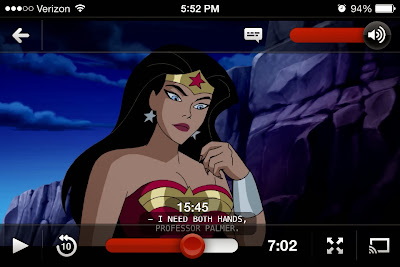 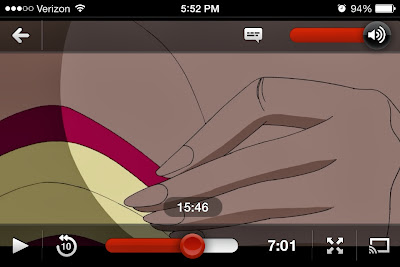 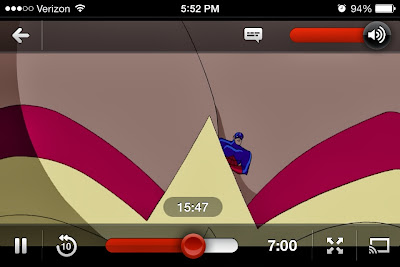 Um, yes, Wonder Woman finds a handy place to put Professor Palmer, one that most men, or less-endowed women, would be unable to utilize.  There are no jokes or even comments about it in the scene.  She doesn’t say, “don’t you dare tell anyone” or anything else.  She just gives him a ride, in her cleavage, as she kicks robot butt and The Atom presumably starts to cry as his lifelong dream comes true.

And no, I am not the first person to notice:

So we salute you, Ray Palmer, the luckiest superhero in the multiverse. 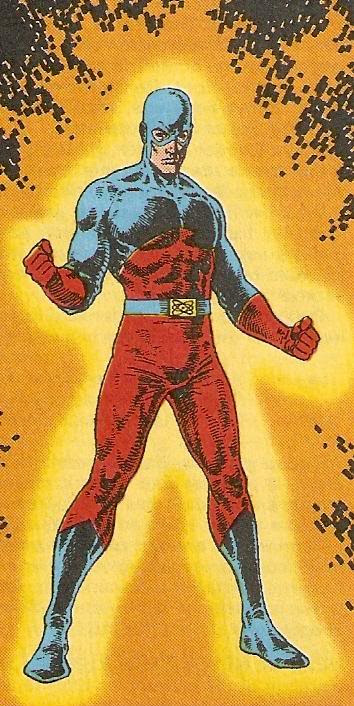 And yes, if they make a Justice League movie, they must include a scene like this.  They will easily make a trillion dollars if they do.

And let me say something else.  In my heart of hearts, I don’t believe that any person supporting me has done any of the above.  But if any of you have, stop it, and if you haven’t don’t start.
Posted by A.W. at 7:16 PM