Bill Waterson Looks Back on Calvin and Hobbes 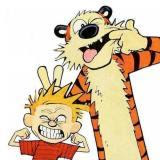 Fifteen years ago today, Bill Waterson walked away from his Calvin and Hobbes comic strip.  He gave an emailed “interview” here.
Interesting stuff if you still love the comics.  And if you are young enough never to have been exposed to it before, give it a read.  Let me lay out the concept.  It’s about a somewhat bratty little boy (Calvin, left) who has a very active imagination.  Hobbes, right, is a stuffed tiger he owns.  Alot of the comics are drawn showing the world as Calvin sees it in his imagination, so that in one panel you see how Hobbes looks in Calivin’s mind, and then the next you see him as an obvious stuffed animal, showing us what his parents see.

Update: Hey, and let's give a shout out to John Campanelli, the reporter who managed to get this interview to us.  To fans, it was a nice gift.
Posted by A.W. at 12:48 PM