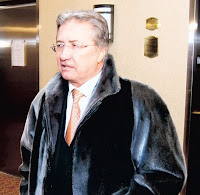 This is Newfoundland’s Premier Danny Williams.  Besides having a seriously pimpin’ jacket, the man also has heart trouble and he needs a procedure to treat it.  So what does he do?
He flies to America.
It reminds me of how when Castro fell ill, rather than receive treatment in the “awesome” system that liberals claim to exist in Cuba, he flew in Spanish doctors to take care of him.
Of course I have seen the Cuban health care system up close.  Back in law school, one of my classmates was straight from Cuba.  His first semester, he had massive braces on his teeth, because apparently he couldn’t get basic orthodontal care over there.  And given that he was going from Cuba to Connecticut, that November was the first time in his life he ever saw snow.  I will always remember watching him standing outside, looking up at the snow coming down, grinning with that metal mouth of his like a kid, and saying over and over, “this is so cool!”  It was charming to see a guy see snow for the first time today.
So don’t bother telling me how wonderful socialized medicine would be.
Posted by A.W. at 6:54 PM