This ain’t meant to be anything deep, just some finds I have made in the last few days.  And, hey, many of these things can be found on Amazon.  So if you were inclined, you might visit some of your favorite sites, like Patterico’s, Althouse or Instapundit and look for the Amazon search widget, which then helps them keep the lights on.  But that won’t work for everything.
For instance, first up we have the Playstation Move Mayhem Bundle: 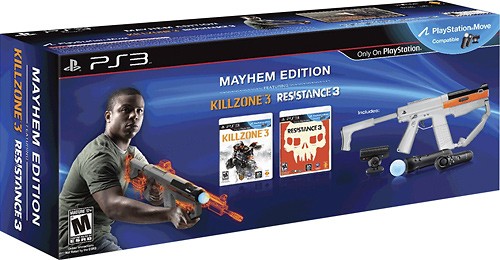 I snagged this one at Best Buy yesterday, and then came home and asked my wife to let me keep it.  (Other married gamers will understand.)  This includes the Move Controller, which ordinarily costs about $50, the navigation controller which costs about $30, the Camera which ordinarily costs $40, the Sharpshooter attachment (the most bad-assed “light gun” attachment for the Wii or PS3) which costs $40, and then two first person shooters, which cost about $40 each.  So if you do the math, that is $240 worth of stuff, for the price right now of about $100, but only at Best Buy.  Although you might be able to convince others to match the price.
Second, at Target I saw Duke Nukem Forever for the Playstation 3...

For only $15.  It was a temporary price cut, so I frankly am not sure how long it will last.  It might already be over.  Yes, generally critics were pretty disappointed in the game...  but at $15 I think it is arguably justified.
By the way, true story.  About a year ago I was wasting time at a Game Stop and talking about how they were finally coming out with that game and the clerk goes, “well, hey, tomorrow we will be selling pre-orders for that.”
I could hardly stop laughing: “Yeah right!  Like I am going to gamble my actual money on that thing coming out...”  I figured they would get it out, but I was not certain enough to actually put my money where my mouth was.
And finally something you can get at Amazon: Karaoke Revolution American Idol Edition:

There are three different version of the game.  There is the original, which I think was limited to the Playstation 2.  I think that one had the best selection of songs, but it also had no Paula Abdul, but instead made up a third person because she refused to give her likeness.  Then there was “Encore” pictured above, which is available for most platforms.  As you can see Paula joined in on that one.  And then there is an “Encore 2,” which I haven’t played but they can’t have screwed it up too much, right?
The basic core of the game is this.  You, and possibly some of your friends, get to pretend to go on American Idol, back when it had Simon, Randy and Paula, and you sing Karaoke style and then they give you scores and feedback.  Now there is a few things to note.  First, on American idol the singers often radically deviated from the original songs.  For instance Chris Daughtry blew me away by singing a grungy version of Johnny Cash’s I Walk the Line:
But, um, with the game, you have to stick to the song as written.  On the other hand, it will allow you to go one entire octave up or down, so if you can’t sing as high as the original singer, you can instead sing much lower, and as long as the notes are the same in relation to the octave you have chosen, you are okay.  So don’t go thinking “I can’t hit those notes.”  Most of you can, with that adjustment.
The fun of the game of course comes from the reactions of the virtual Simon.  Yeah, maybe you care about the other virtual characters, but really its Simon who makes it fun.  If you are bad, he will tell you in terms that sounds like he was really listening to you, making you want to do all that much better in order to make him eat his words.
Next is what I consider the all time perfect “I don’t know what to get this person” gift.  If you are not precisely sure what a person would like, then this is sure to please:
This is the CD version of the Autobiography of Martin Luther King, Jr.  I have mentioned it before back when I was guest blogging at Patterico’s, writing:
Finally, let me once again provide a recommendation to you.  If you have not enjoyed The Autobiography of Martin Luther King, you owe it to yourself to pick up a copy.  I most fervently recommend the audio version (linked).  Now, I don’t want you to think it is more than it is.  It is read very well by LeVar Burton, with occasional audio clips from Dr. King himself.  So most of your time you are not going to hear Dr. King’s voice. And it is not a true autobiography, so much as a group of autobiographical writings stitched together by editor Clayborne Carson.  Still, I listened to that one summer when driving home from law school and it felt like Dr. King was sitting in the car with me, having a conversation.  It was powerful.
But also it is a road hazard, given that you are almost guaranteed to be moved to tears at least once.
It’s the kind of gift that you can give a person, and when receiving it, they might not be sure they would like it...  but after they listen to it, they are very thankful to you for giving it.  It is really an outstanding recording (it won a Grammy, after all).
So we have gone from extreme simulated violence, to a book about non-violence, all in one post!
---------------------------------
Please note, I have received nothing in consideration for these recommendations.  The ones I have purchased, I have purchased just like anyone else.  And if I didn't purchase it, I don't have it.
----------------------------------
Follow me at Twitter @aaronworthing, mostly for snark and site updates.
Posted by A.W. at 5:43 PM