Update: Glenn Reynolds, of Instapundit fame, writes in Popular Mechanics about why this recommendation is wrong.  He also notes importantly that this is just a recommendation—they are not going to coerce states into this as I wonder below.  You would tend to think that if they were just making recommendations, they would make sure that the recommendations were not so completely idiotic that they would be rejected out of hand.  And at Instapundit, he has more.


So the news comes out today that the NTSB wants the states to ban all of the use of cell phones, except in emergencies.  From Cnn’s article:

A federal safety board called Tuesday for a nationwide ban on the use of cell phones and text messaging devices while driving.

The recommendation is the most far-reaching yet by the National Transportation Safety Board, which in the past 10 years has increasingly sought to limit the use of portable electronic devices -- recommending bans for novice drivers, school bus drivers and commercial truckers. Tuesday's recommendation, if adopted by states, would outlaw non-emergency phone calls and texting by operators of every vehicle on the road.

But there was one line in that Cnn report that puzzled me:

It would apply to hands-free as well as hand-held devices, but devices installed in the vehicle by the manufacturer would be allowed, the NTSB said.

When I read that, I wondered what the hell they were talking about.  I mean I hadn’t seen a cell phone that was permanently installed in a car since Bill Clinton was President.  I considered several interpretations, but rather than speculate, I went and found the NTSU’s official releases, to see if it might shed some light on the matter.

The truth of the matter is that they are talking about something much more radical.  Take this language from the main index page for this “Gray Summit” providing recommendations:

To the 50 states and the District of Columbia:
1.      (1) Ban the nonemergency use of portable electronic devices (other than those designed to support the driving task) for all drivers; (2) use the National Highway Traffic Safety Administration model of high visibility enforcement to support these bans; and (3) implement targeted communication campaigns to inform motorists of the new law and enforcement, and to warn them of the dangers associated with the nonemergency use of portable electronic devices while driving. (H-11-XX)

Folks, they are not talking about cell phones only.  They are talking all electronic devices.  And if you were uncertain just how radical their intentions are in this, take this screencap of a slide from the Power Point style presentation they gave: 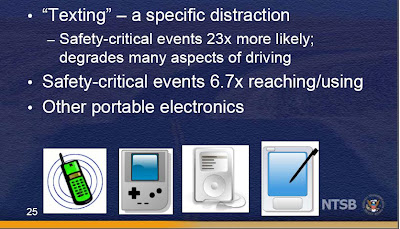 Yeah, folks, that is an iPod or other MP3 player on the middle right.  And oddly, a Nintendo Gameboy, too—a model that has been out of circulation for some time.  It doesn’t exactly fill you with confidence that we aren’t just dealing with luddites when you see a thing like that.

And indeed if you take their wording literally, even listening to the radio would be banned.  That seems to be what Cnn was alluding to when talking about devices installed by the manufacturer.  But scanning the synopsis of this “summit, the slide show, the opening statement, and the closing statement, I don’t see a single word that suggests that the NTSB is making that distinction and it would indeed make no sense.  There is no reason to think a radio installed in your dashboard is safer than an iPod piped through your car stereo.  And there is certainly no reason to think it matters whether the radio in your dashboard is installed by the manufacturer or not.  I am not saying Cnn is necessary wrong to report that.  Perhaps officials in the NTSB said that to the reporter informally.  But so far I see no sign in the materials I have seen suggesting that they have given the thumbs up to the use of car radios by operators of motor vehicles.

And indeed, you have to wonder if this would also affect that mainstay of the trucking profession: the CB radio.  My father worked in trucking just about his whole life, and I am pretty sure the average trucker’s attitude about his CB is pretty much the same as Charlton Heston’s attitude toward his gun:

(The original draft of that speech read “from my cold dead hands, you damn dirty ape!”)

The only question is how far will they go to impose this ridiculous ruling.  For instance, did you ever wonder why the age of drinking is twenty-one in every state?  After all, the Twenty First Amendment is read not merely as a repeal of the Eighteenth Amendment (prohibition) but it is a declaration that the Federal Government is uniquely disempowered when regulating the issue of alcohol use and consumption in the states.  Well, it is because the Federal Government decided to tie this to transportation funds—that is, if a state didn’t pass laws raising the drinking age to twenty-one, then that state would lose all transportation funding, a policy upheld in South Dakota v. Dole.

So which will it be here?  Will this be merely a gentle statement, or will this be an edict tied to federal funds?  Perhaps there is someone out there in legal land who knows enough about how NTSB regulation to know which it will be.