So yesterday I told you about a horrifying piece in the Journal of Medical Ethics entitled “After-Birth Abortion: why should the baby live?”  In it they argued that well some babies are so deformed or whatever that they really shouldn’t be allowed to live and so we should be allowed to kill them and call it After-Birth Abortion to make it sound less horrifying than the correct term (which is infanticide)?
You think I am exaggerating?  Well, go and read the original and judge for yourself.
One aspect I didn’t get into in my original post is that, well, this shouldn’t surprise you but some people have had some very strong reactions to it.  So we get Julian Savulescu, Editor, Journal of Medical Ethics writes a piece entitled “Liberals Are Disgusting”: In Defence of the Publication of “After-Birth Abortion.”
Now he starts off reasonably enough talking about how they got death threats.  “This article has elicited personally abusive correspondence to the authors, threatening their lives and personal safety.”
That is undoubtedly wrong, and I hope they have reported such death threats to the authorities and that the authorities take it appropriately seriously.
But then he complains about “abusive emails” writing:
The Journal has received a string [of] abusive emails for its decision to publish this article. This abuse is typically anonymous.
I am not sure about the legality of publishing abusive threatening anonymous correspondence, so I won’t repeat it here. But fortunately there is plenty on the web to choose from. Here are some responses:
“These people are evil. Pure evil. That they feel safe in putting their twisted thoughts into words reveals how far we have fallen as a society.”
“Right now I think these two devils in human skin need to be delivered for immediate execution under their code of ‘after birth abortions’ they want to commit murder – that is all it is! MURDER!!!”
“I don‘t believe I’ve ever heard anything as vile as what these “people” are advocating. Truly, truly scary.”
“The fact that the Journal of Medical Ethics published this outrageous and immoral piece of work is even scarier”
(Comments from http://www.theblaze.com/stories/ethicists-argue-in-favor-of-after-birth-abortions-as-newborns-are-not-persons/#comments)
He goes on (and on) but here is the real whopper, folks, when he says this:
What is disturbing is not the arguments in this paper nor its publication in an ethics journal. It is the hostile, abusive, threatening responses that it has elicited. More than ever, proper academic discussion and freedom are under threat from fanatics opposed to the very values of a liberal society.
I think it is time for a Rule 5 facepalm: 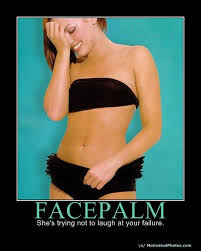 Now of course one of the comments he quoted above borders on an actual threat, saying “I think these two devils in human skin need to be delivered for immediate execution...”  I am not sure that is an actionable threat—and indeed the answer might vary wildly by jurisdiction—but I think perhaps a police officer should go by this person’s house and discuss his or her intent in writing that.
But the other comments?  They are nothing more than citizens expressing their opinions.  And contrary to what Mr. Savulescu says, criticism is not a threat to freedom of speech.  That is indeed, what is supposed to happen in a free society.  When someone says something you don’t like, you don’t threaten them or bomb them, you just counter them with your own speech.
(And that is leaving aside defamation and similar dishonesty where defamation suits and the like are the appropriate remedy.)

Indeed, his argument doesn’t even make sense.  I mean he is criticizing them for criticizing him, so isn’t he “suppressing” their freedom of speech, by his “logic?”
And this passage trying to argue that what these people wrote was not so bad is just pathetic:
As Editor of the Journal, I would like to defend its publication. The arguments presented, in fact, are largely not new and have been presented repeatedly in the academic literature and public fora by the most eminent philosophers and bioethicists in the world, including Peter Singer, Michael Tooley and John Harris in defence of infanticide, which the authors call after-birth abortion.
The novel contribution of this paper is not an argument in favour of infanticide – the paper repeats the arguments made famous by Tooley and Singer – but rather their application in consideration of maternal and family interests. The paper also draws attention to the fact that infanticide is practised in the Netherlands.
Besides engaging in the fallacy of the appeal to authority, I don’t particularly care if it is not a new argument.  If all of these other people have made this argument—hell if the Netherlands practices it—then a pox on all of them, too.  Killing a baby is just plain wrong and if you can logic your way into drawing the appalling conclusion that it is okay to kill a baby, then you have officially become so cloistered in academia that you are in danger of disappearing up your own arse.
I mean pardon the bad language, but it has to be said.
I went to one of the most “academic” law schools in America and I can tell you that in that environment some of the craziest stuff gets advocated.  I won’t name the professors but there is one who says that the constitution was amended in the 1930’s to require the New Deal.  I don’t mean that Roosevelt pushed into the court a set of justices that interpreted the constitution differently—that is a very reasonable theory.  I mean he believes it was actually amended, without anyone knowing it let alone knowing that they were doing it as they did it.  Another argued that judges should be able to overrule statutes whenever they didn’t make sense.  That is you don’t have to wait for the statute to violate the constitution, the judge only has to decide that it doesn’t make sense.  When I tell other people about these kinds of ideas, I literally have a hard time convincing them someone actually said that.  In other words, it is so off-the-wall that people have trouble believing that anyone would advocate for that.
People in academia get into this environment where common sense and plain thinking is devalued, where everyone is afraid to tell anyone that something is a bad idea—especially the students who are hoping and praying that this professor will give them a hearty recommendation—and pretty soon they find themselves spouting the most idiotic stuff with no negative feedback.  So then when this kind of stuff gets out to the real world, and suddenly they face just and harsh criticism, it’s a bit of a shock, I am sure.
The reality is that the opinion that it is ever okay to commit infanticide is evil.  I won’t say that this publication is evil for having printed it.  They argue that they are a forum where all well-reasoned views are welcome.  And there is a value to putting this stuff out.  As they say sunlight is an excellent disinfectant.
But I would wonder how far they would be willing to go.  For instance, Mr. Savulescu turns up his nose at the racism in one comment.  But what of a well-reasoned argument for the extermination of a particular race or believers in a certain religion?  Would he publish that too?
I am not in favor, for instance, of saying that certain books can ever be banned, however evil they are.  Mein Kampf, for instance, is a vile book and is literally banned in many countries, but I think the precedent it sets for censorship is a greater danger than the dead pen-hand of Adolf Hitler.  But at the same time I have absolutely no problem with a book store saying “I refuse to sell this book.”  One may be free to publish it, there is no God-given right to a publisher or to have it stocked at a book store.
So if they are a true free-fire zone where the most vile, most non-PC arguments are made, that is one thing.  But if they are not, then they have to ask why this is acceptable speech in their minds.
---------------------------------------
Follow me at Twitter @aaronworthing, mostly for snark and site updates.  And you can purchase my book (or borrow it for free if you have Amazon Prime), Archangel: A Novel of Alternate, Recent History here.  And you can read a little more about my novel, here.
Posted by A.W. at 7:11 AM