Ken at Popehat is right to mock @OccupyRebellion for her “delicious tears” in her twitter feed following Kimberlin’s loss this morning.  You know how to read this—from bottom to top: 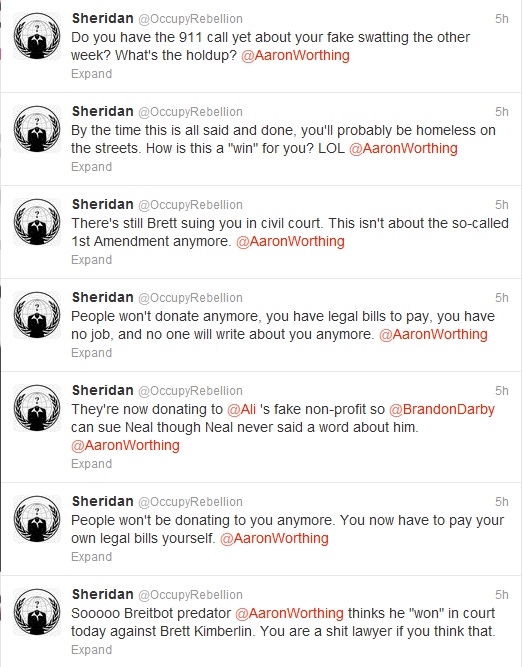 This twitter user who is also NOT BRETT KIMBERLIN has been accusing me of faking my SWATting on the bizarre charge that I am friends with one of the police officers who showed up at the scene.  Of course that is not true.  But then again, to hear this person tell it, I also framed Anthony Weiner by hacking into his account and sending the picture of his... um... Weiner to that young co-ed, so this person doesn’t have the firmest grasp on reality.
But one of those tweets highlights a serious issue:

That is their unabashed goal: to destroy my life, my livelihood, to take away my law license and even put me in prison if they can.  And I would be truly surprised if they stopped after the metaphorical bloody nose I gave Kimberlin today.  I know the fight isn’t over, not by a long shot.
And I can’t respond to all of @OccupyRebellion’s crazy, but let me be specific on a few points.  No friend of mine has ever showed up at Kimberlin’s house.  In fact Kimberlin couldn’t offer one piece of evidence to establish any relationship between me and John Norton, the man who allegedly trespassed on his property.
And I have already made it clear that the Prince William County police is not going to make my SWATting call public while the investigation is in progress.  They might let me listen to it, but they will not give me a copy to upload.  And I respect that; I care more about solving the crime than convincing a person so crazy they need a conspiracy to explain how a congressman might step out on his wife.
And I will say this unequivocally.  Any person can listen to Brandon Darby’s voice.  He absolutely does not sound like the previous three SWATters, and I would probably die of shock if my SWATter sounds even the slightest bit like him.  Mind you, I am not going to disclose what it sounds like even after I hear it so long as the investigation continues, but that is my firm belief.
But don’t take my word for it.  Listen to Darby speak, here:
And then listen to Patrick’s SWATting call, here.  And decide for yourself.
Finally there is one parting thought, here.  According to Brett Kimberlin’s legal theory, what @OccupyRebellion has been doing for the last few months, to me and my friends, is harassment. So   @OccupyRebellion should be glad that our respect for Freedom of Expression is greater than Brett Kimberlin's.
---------------------------------------
Disclaimer:
I have accused some people, particularly Brett Kimberlin, of reprehensible conduct.  In some cases, the conduct is even criminal.  In all cases, the only justice I want is through the appropriate legal process—such as the criminal justice system.  I do not want to see vigilante violence against any person or any threat of such violence.  This kind of conduct is not only morally wrong, but it is counter-productive.
In the particular case of Brett Kimberlin, I do not want you to even contact him.  Do not call him.  Do not write him a letter.  Do not write him an email.  Do not text-message him.  Do not engage in any kind of directed communication.  I say this in part because under Maryland law, that can quickly become harassment and I don’t want that to happen to him.
And for that matter, don’t go on his property.  Don’t sneak around and try to photograph him.  Frankly try not to even be within his field of vision.  Your behavior could quickly cross the line into harassment in that way too (not to mention trespass and other concerns).
And do not contact his organizations, either.  And most of all, leave his family alone.
The only exception to all that is that if you are reporting on this, there is of course nothing wrong with contacting him for things like his official response to any stories you might report.  And even then if he tells you to stop contacting him, obey that request.  As you will see by the time I am done telling my story that this is a key element in making out a harassment claim under Maryland law—that a person asks you to stop and you refuse.
And let me say something else.  In my heart of hearts, I don’t believe that any person supporting me has done any of the above.  But if any of you have, stop it, and if you haven’t don’t start.
Posted by A.W. at 8:21 PM