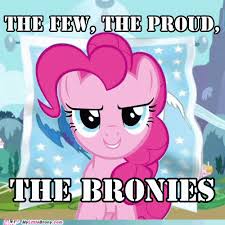 Sometime in the last few months I learned about the phenomenon of Bronies.  “Bronies” are fans of the show My Little Pony, particularly the more recent My Little Pony: Friendship is Magic, who happen to be guys.  Get it?  Bro, as in brother, bro-nies?  So yes, this is a thing.
And they even have a thing called Bronycon.  Yes, hard-core Trekkies, you finally have someone you can look down on!  Here’s some videos from it:
And then today we get the special horror that is the Brony fighting game.  Called Fighting is Magic, this is a 2-D fighting game, featuring My Little Pony.  Which is being created for free, to be released for free, by the fans and without approval of the actual franchise owners.
You can watch some of it here:
Indeed you can watch an entire two-hour livestream of other people playing the game, here, for some reason:
But there is trouble in um… Equestria?  Apparently someone leaked the pre-bata code to the game which led to this oddly angry letter:
Open Letter to the Brony Fandom and the Fighting is Magic follower base.
As you might be aware today, one of our QAs broke our trust and a NDA agreement, and leaked a working build of Fighting is Magic to the Internet. As a result, our Internal QA testing program has been terminated.
The unfinished version of Fighting is Magic is, needless to say, unsupported. We won't answer any questions relative to it, we won't give technical support to it, we won't discuss mechanics or graphic details from it, given its status as a leaked, unfinished, internal testing build, which happened to be leaked just right before a major update was pushed to our now closed QA test program.
We're very, very disappointed in those we gave our trust to. We're also very disappointed in those downloading and distributing the leaked version.
Teaches us a lesson, though.
For now, Fighting is Magic will be going on a closed development cycle. No further QA, Alpha, Beta or testing program will be started or maintained until we have the remaining two characters done for the initial build. In addition BSUs will be cancelled, and no major content-related updates to the website will be forthcoming until further notice, while we at Mane6 deal with this situation and discuss changes for the future of the project.
That's all for now.
- Mane6
P.s. Don't worry, the game is still in the works. We're just dealing with the current situation.
You know, if the game is really going to be given out for free, and it is almost certainly in violation of the intellectual property rights of the show’s owners, it seems weird for them to get so proprietary about it.  But that is how they feel.  Anyway, so Bronies everywhere if you want to see your favorite ponies fight it out, someday you’ll get the chance.  Indeed, I guess you can find this leaked version yourself if you care.
But for my money, if you want a fighting game that features characters who are a little too pretty, it’s hard to beat the Final Fantasy Dissidia series:
Hat tip: Kotaku.
---------------------------------------
My wife and I have lost our jobs due to the harassment of convicted terrorist Brett Kimberlin, including an attempt to get us killed and to frame me for a crime carrying a sentence of up to ten years.  I know that claim sounds fantastic, but if you read starting here, you will see absolute proof of these claims using documentary and video evidence.  If you would like to donate and help my wife and I in this time of need, please go to this donation page.  And thank you.
Follow me at Twitter @aaronworthing, mostly for snark and site updates.  And you can purchase my book (or borrow it for free if you have Amazon Prime), Archangel: A Novel of Alternate, Recent History here.  And you can read a little more about my novel, here.
---------------------------------------
Disclaimer:
I have accused some people, particularly Brett Kimberlin, of reprehensible conduct.  In some cases, the conduct is even criminal.  In all cases, the only justice I want is through the appropriate legal process—such as the criminal justice system.  I do not want to see vigilante violence against any person or any threat of such violence.  This kind of conduct is not only morally wrong, but it is counter-productive.
In the particular case of Brett Kimberlin, I do not want you to even contact him.  Do not call him.  Do not write him a letter.  Do not write him an email.  Do not text-message him.  Do not engage in any kind of directed communication.  I say this in part because under Maryland law, that can quickly become harassment and I don’t want that to happen to him.
And for that matter, don’t go on his property.  Don’t sneak around and try to photograph him.  Frankly try not to even be within his field of vision.  Your behavior could quickly cross the line into harassment in that way too (not to mention trespass and other concerns).
And do not contact his organizations, either.  And most of all, leave his family alone.
The only exception to all that is that if you are reporting on this, there is of course nothing wrong with contacting him for things like his official response to any stories you might report.  And even then if he tells you to stop contacting him, obey that request.  As you will see by the time I am done telling my story that this is a key element in making out a harassment claim under Maryland law—that a person asks you to stop and you refuse.
And let me say something else.  In my heart of hearts, I don’t believe that any person supporting me has done any of the above.  But if any of you have, stop it, and if you haven’t don’t start.
Posted by A.W. at 12:01 PM