The “You Go Girl!” Video of the Day

First, I have said that I am a proud feminist of the old school variety.  Conservatives should not let liberals own this word.  It doesn’t have to be abortion on demand and women doing “sl__ walks.”  It can simply be a demand that women be given the same opportunities that men are, and letting the market sort things out.

The irony is that too often liberals find that feminism ends where multiculturalism begins.  They demand equality of opportunity for Christian women, but when faced with an allegedly Islamic demand that a woman cover her head, etc. they too often shrink into moral relativism.  Which, by the way, is a discrimination against Muslim women.

Cultural purity in all frankness is too often preserving cultural silliness just to preserve it.  For instance, once when I was around eight years old my parents had a genuine Scottish bagpiper come to our house and play a few tunes.  I was brutally honest in my assessment in the way only young kids can be.  Something to the effect of “this is giving me a headache.”  And my parents were telling me that I should listen to it and like it because it was my culture.

But I had made up my mind.  The music sucked.  I had no interest in it and prayed it would be over soon.  And I have only voluntarily subjected myself to Scottish bagpipe music a few more times and my assessment has never changed.

Years later I was watching a History Channel special on the history of Scotland (you see, children, at one time the History Channel actually had history related documentaries on it), and they explained what Scottish pipes were really for.  They explained that, Scottish bagpipes were actually weapons of psychological warfare.  That is, a guy would stand in the hills above the enemies (read: the English) and play the pipes and it would so irritate their enemies it would reduce their effectiveness on the battlefield.  It was the medieval equivalent of, well... this:

The noodles, and in this case a very fat man showing off his belly, are all designed to screw up the player’s game.  Scottish bagpipes and the famous practice of mooning their enemies served a similar purpose on in warfare.

Well, when I saw that about the Scottish pipes, I just about fell over laughing.  I pictured all of these Scottish types who listen to this music intentionally, when in fact it was something we originally concocted to inflict upon our enemies!

(And before you say “but Scottish pipes are beautiful! Especially in Braveheart!” bear in mind in Braveheart, the most Scottishy Scottish movie ever, they used Irish pipes, because they were more melodic.  Which is Mel Gibson’s polite way of saying that Scottish pipes sound too awful for even this.)

As for the head coverings, Mark Steyn eviscerated this bit in his book America Alone when dealing with the similar “tradition” of the jilbab: 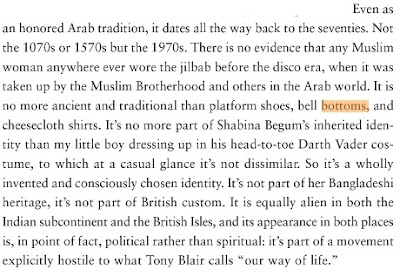 Now the limits of any reasonable theory of feminism is personal freedom.  A woman should be free to be a doctor, lawyer, soldier, what-have-you, so long as she can do the job, but if she just wants to stay home, raise the kids and bake cookies, that’s her business, too.  Or more precisely, it’s in the give and take of any family where finances are juggled with aspirations, responsibilities and so on.  And if a woman decides for whatever reason that she must wear a veil, that’s her decision ultimately, too, within some limits of reason (i.e. not if it makes it unsafe to drive).

But that doesn’t mean we can’t encourage women to reject this kind of sexist tradition and cheer them on when they do.  Over in Egypt, women on state television have been allowed to wear hijabs for the first time in years.  Of course you have to suspect what is right now a matter of personal preference will soon become de facto required, enforced by employment discrimination and even potentially threats.  Women are fighting to be treated equally over there, and that resulted in this dustup:

Yep, that is pure awesomeness.  I especially like how she pointed out that he could deal with veil-less women on the street but pretended he couldn’t handle it in an interview.  Hopefully she is a sign of forces of secular democracy that will push back against the Muslim Brotherhood.  But in the meantime we can admire the special beauty of a woman who won’t take no crap from anyone.

And let me say something else.  In my heart of hearts, I don’t believe that any person supporting me has done any of the above.  But if any of you have, stop it, and if you haven’t don’t start.
Posted by A.W. at 12:01 AM