The Danger of Shirtgate (to Conservative Pundits)

Let’s start by saying something basic.  “Shirtgate,” as it is being called, is kind of dumb overall.  It is not worth writing about in and of itself, but it is worth talking about for what it says, overall, about social attitudes and similar issues.

It started with the landing of a probe on a comet.  It was supposed to be a “one small step for a man” moment, and it was, but some radical feminists spotted something they really didn’t like: this shirt.

See, this shirt was supposedly sexist because it showed women nearly undressed.  I suppose the non-sexist version would be showing both men and women half-naked, because of course it is sexist to prefer to see sexy women or something.  I mean, “sexist” means discriminatory against women and I suppose these feminists would prefer that if you show half-naked flesh, that you be equal about it.  Never mind that that when it comes to anything related to sex and procreation most humans practice some kind of gender discrimination.  To combine two of my common jokes, on one hand I practiced strict equal opportunity when I was a single man: I asked out and was rejected by women of every color, race, religion and even disability status.  On the other hand, I practiced gender based discrimination at the time, too—you might as well have hung a sign over my bed: no men need apply.

And the deeper point behind my jokes is that while I think a person should be ideally open in their hearts to any color, religion, etc. when seeking that one person that makes you happy, gender discrimination is utterly acceptable in sex and romance.  And so if we talk about, say, what images of half-naked persons a person might admire there is almost always going to be a sexual preference.  Even most bisexual people seem to have a preference.  So a straight male wearing a shirt featuring half naked people he is attracted will wear a shirt like that ESA (European Space Agency) scientist you saw above.  Meanwhile, a woman or a gay man might wear something like this: 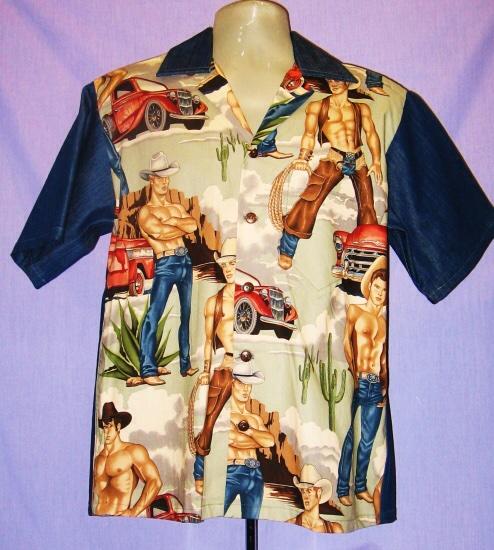 I would pose this question to the two radical feminists who raised this brouhaha: is that shirt sexist?  If you see a gay man, or a woman wearing these half-naked cowboys, would you claim hysterically (sorry, hersterically) that this is “three steps back for humankind”--as these radical feminists argued?

First, it is weird to think that the so-called “progress” that liberals always say is inevitable and irresistible is also so fragile that it can be shattered by one guy’s shirt.

Second, I think that hypothetical exposes the truth of the matter.  The truth is the term “sexist” is often just the word modern liberals use when they are offended by what we used to just call “indecency.”  They have been trained to dislike moralistic language, so this is only way they know how to object to such sexuality on display.

So there was this minor uproar and eventually Matt Taylor, the wearer of the offending shirt, offered a tearful apology:

I am tempted to say to Taylor to man up a bit.  Apologize if you are inclined, but why are you getting so weepy about it?  Just say you screwed up and move on.  But then I don't know what kind of pressure he might have been under, so I won't judge.

This apology in turn fueled the ongoing backlash against the controversy.  Now it is true that this is a silly tempest in a teapot that shouldn’t have gotten even this much attention.  And the silly feminist pearl clutching is silly and ill-thought-out as I demonstrated above.  But I think there is a danger that conservative pundits will come off as out of touch with the people. 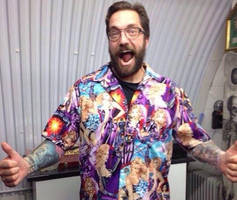 In short, let me pose this question.  When exactly did it become conservative to say that a person should dress for work this way?

As I said on twitter, I have never in my life had a job where it was acceptable to dress like that.  That may be warped by the field I am in.  It used to be that all lawyers dressed for work in at least a two piece suit, if not a full three-piece ensemble.  Thankfully before I entered the workforce the norm became “business casual,” which probably would eliminate even pictures of inoffensive images, like this (left), and not just because the shirt had no collar.

The fact is that many of conservative pundits work in highly abnormal workplaces.  Some work from home and, gasp, might even be able to wear pajamas as they write.  Others do work in actual offices, but they just aren’t very traditional and they don’t dress very traditionally.  And the danger is that regular people reading of this controversy might say “I could never dress this way at work.”  And further, they might feel that people shouldn’t be able to dress this way at work.  And this might be reinforced by the fact that this is space flight.  Discipline is seen as more important, there, and professionalism is seen by many as a reflection of discipline.

I will admit that I wouldn’t want to see this at work.  The wolf shirt doesn’t bother me as much, but remember how I said above that the claim of “sexism” was really a claim that it was "indecent?"  Well, that’s exactly what it is to me.  If I am talking to a coworker about something important, I don’t want a creepy, overly sexual shirt in my face.  Call me a prude, but that’s how I see it.  I don’t have a problem if he wants to put posters like this all over his walls at home, but keep this kind of stuff at home and off the clock.

So the danger, here, is that conservative pundits might come off as out-of-touch from the base which 1) can’t wear this kind of thing at their work and 2) might even agree with that policy.  Mind you, I don’t think this danger is a huge concern, either, but it is there.  And as conservative pundits rightly excoriate liberals for being out of touch with the concerns and values of ordinary Americans, we have to be careful to be aware of how our lives might be different, creating biases regular folks don't share.

Ultimately, this entire hand-wringing, pearl-clutching event shouldn't have become this big a deal, shouldn't have been a battleground of the culture wars, shouldn't have resulted in a tearful apology and so on.  But it should've been an occasion for a supervisor privately telling him not to wear that to work again and to look professional in the future.  And to pretend there was nothing wrong at all with what he wore is a mistake, too.  There is a middle ground between "not worth making an international incident about it" and "totally what a person should wear to work," and that is where this matter should have fallen.

That being said, this image might very well break the internet:

And let me say something else.  In my heart of hearts, I don’t believe that any person supporting me has done any of the above.  But if any of you have, stop it, and if you haven’t don’t start.
Posted by A.W. at 8:45 PM