So if Sea World is Slavery, Then Isn’t This Genocide?

On petard hoisted:
Documents published online this month show that People for the Ethical Treatment of Animals, an organization known for its uncompromising animal-rights positions, killed more than 95 percent of the pets in its care in 2011.
The documents, obtained from the Virginia Department of Agriculture and Consumer Services, were published online by the Center for Consumer Freedom, a non-profit organization that runs online campaigns targeting groups that antagonize food producers.
Fifteen years’ worth of similar records show that since 1998 PETA has killed more than 27,000 animals at its headquarters in Norfolk, VA.
In a February 16 statement, the Center said PETA killed 1,911 cats and dogs last year, finding homes for only 24 pets.
So strap yourself in, because I am going to get a little philosophical again.
Now I confess, normally I wouldn’t care very much about any organization killing lots of animals.  While only finding homes for 24 pets is a pretty pathetically low number I can’t say with any certainty that this is an unavoidable result.
But when an organization gets so high and mighty as to claim in court that being a trained animal at Sea World is a form of slavery, then it becomes relevant.
And it is worth going back to that “Sea World is slavery” argument for a second.  In that suit they were seeking, in part, a release of the orcas from Sea World.  But is that really in the best interest of the orcas?
Let’s take a moment to talk about what is the natural world.  We labor under the idea of a divided world, where on one hand there is the world of humanity, and on the other hand there is the “natural world” untouched by humanity.  I admit to thinking that way a lot, but it is wrongheaded thinking.  First there is exceedingly few places utterly untouched by humans and second, there is plenty of nature all around us.

We do get, intuitively, that humanity’s influence is markedly different from that of every other creature.  You see most other creatures primarily rely on two methods of adaptation.  The first is acclimation—that is their bodies naturally adjusting to changing conditions.  Thus if you place an animal in a colder climate, for instance, very often they will grow thicker fur.  The second, obviously, is genetics and evolution.  Now I don’t want to get into a debate of evolution as an origin v. creationism, but there can be no reasonable debate that evolution is currently happening, however we got here.
But humans use a third method of adaptation that most other animals do not use—or at least do no use as often as we do—our brains.  As I wrote in a completely different context:
In a very real way, humanity is the disabled species.  Think about it.  Compared to other species, we are slow, weak, blind and deaf; we have little sense of smell, our teeth and “claws” are weak, etc.  If left naked in the wild we would be easy supper for the other animals out there.  And yet we dominate the planet for one simple reason: our brains.  And those brains have allowed us to create tools that in turn makes up for our deficiencies.  So we can’t run as fast as a cheetah, but we invented motor cars that allowed us to move even faster and for long periods of time.  We can’t see like an eagle, so we invented the telescope and can see things no other creature can.  Our brains haven’t just leveled the playing field between animal and man, but in fact gave us a critical advantage over them which is why we rule this planet and no longer have any natural predator (except ourselves).
And of course this ability to use our brains to adapt has a lot of side effects both good and bad.  For instance, it allows humans to have survival plans that are utterly alien to the wild.  For instance, this guy… 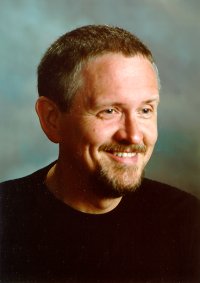 ...has a survival strategy of making up stories that entertain and delight us, but in all likelihood does nothing to practically help us.  And I don’t say that to put down Orson Scott Card.  Indeed, I love his books.  I am just noting that in the “animal” world his skill set would be useless and unlikely to contribute to his own survival, let alone giving him the opportunity to pass on his genes.  And indeed much of what humans decide to do with our big brains positively harms our survivability and our ability to reproduce.
I mean to give an example of how our brains actually can harm us from an evolutionary point of view, there is this kind of stupidity:
That might need age verification to see, and if you don’t feel like watching, it is a video of various morons intentionally getting hit in the “beanbag.”  And while I admit it’s pretty funny, seeing that they are not getting paid millions of dollars to do this to themselves (unlike the guys on Jackass), it’s really hard not to see this as moronic behavior that is likely to remove them from the gene pool.  I am sure the Darwin Awards would approve.
But there are other examples of human behavior that tends to remove us from the gene pool that one is hard-pressed to call dumb.  Consider for instance this:

The first is the flag of Scotland, which contains a St. Andrew’s cross—that is essentially a sideways cross.  The second is not a symbol of Satanism (though it can be), but rather of St. Peter.  Tradition holds that St. Peter requested to be crucified upside down because he was not fit to be executed the same way as Christ, and St. Andrew decided to go sideways.  There is considerable doubt about whether the upside down and sideways stories are true, but there is little doubt that these men were martyred.  And just as I am not being critical of Card when I said that his skills would be useless in the wild, I am not being critical of these men when I say that their conduct was not well-calculated to ensure the survival of their genes.  Evolution has no morality, but humans can.
Or to pick a more contemporary example of less dubious historical accuracy, there is this. 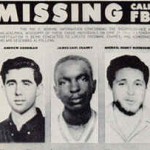 That would be James Chaney, Andrew Goodman and Michael Schwerner, three civil rights activists who were murdered by klan types memorialized in the movie Mississippi Burning.  This movie sadly inspired this act of violence:
On the evening of October 7, 1989, a group of young black men and boys, including Mitchell, gathered at an apartment complex in Kenosha, Wisconsin. Several members of the group discussed a scene from the motion picture "Mississippi Burning," in which a white man beat a young black boy who was praying. The group moved outside and Mitchell asked them: "`Do you all feel hyped up to move on some white people?'"...  Shortly thereafter, a young white boy approached the group on the opposite side of the street where they were standing. As the boy walked by, Mitchell said: "`You all want to fuck somebody up? There goes a white boy; go get him.'"...  Mitchell counted to three and pointed in the boy's direction. The group ran toward the boy, beat him severely, and stole his tennis shoes. The boy was rendered unconscious and remained in a coma for four days.
I mean look at that picture again:

It is concrete proof that not all white people are bad and yet these brain surgeons use that movie as an excuse to engage in precisely the same kind of racist violence the movie denounced.  Our brains can lead us to be positively stupid.
But more germane to my point, these three civil rights workers who were murdered are in human morality generally seen as honored martyrs to a noble cause and rightly so, but from the cold, immoral view of evolution they are failures: they died young and most likely did not successfully reproduce even once.  They are a genetic dead end.
The point is that the part of the world dominated by man—in other words, most of it—is also nature, too, but its rules are very different from what we traditionally think of as nature.  For instance, which is the more successful creature on Earth?  This?

Well, last I checked, Cheetahs were barely holding on.  On the other hand it is estimated that there are over a billion cows on Earth.  And what makes the difference?
Simple.  Cows are delicious to humans.  So we feed them, breed them and kill them for meat and handbags.  Indeed, some humans are even known to do this to the horns of the male of the species:

And indeed what counts as a smart breeding strategy gets even stranger when humans are involved.  Keeping cows alive and healthy as meat makes a lot of sense from an evolutionary perspective.  Indeed it can be said that humans and cows have an almost symbiotic relationship--certainly a mutually beneficial one.  On the other hand, it makes no evolutionary sense for a human to do this to a poor animal:

(Four out of five male readers are now wondering "what dog?  I didn't see any dog.")
But in a way this is part of a very successful evolutionary strategy for the dog.  Dogs have managed to ingratiate themselves with humans even though I suspect that the majority of them do nothing that is practically useful to us at present.  I am not saying they can’t be very useful just that in my unscientific estimate most dog-owning humans don’t do that sort of thing with dogs anymore.  They keep them mainly to give and receive unconditional love.  And apparently to be an accessory.
So PETA’s strategy is to get us to render Orcas—and indeed all animals—off limits to human use, be it serious or silly?  Nothing could more surely hasten their extinction.  No, if you care about animals, you find a way for them to cope successfully in the human world and best of all, to ingratiate themselves with humans--as meat, if not as a friend.  Like it or hate it (and I on balance like it) we dominate this place.
---------------------------------------
Follow me at Twitter @aaronworthing, mostly for snark and site updates.  And you can purchase my book (or borrow it for free if you have Amazon Prime), Archangel: A Novel of Alternate, Recent History here.  And you can read a little more about my novel, here.
Posted by A.W. at 3:26 PM