Friday Frivolity: The “Happy Birthday to Me” Edition!

These frivolous posts are not supposed to be terribly deep and I admit this has to be one of the most shallow.  I have been watching a lot of old shows on my Netflix.  I worked through the entire catalogue of the original Star Trek episodes.  I’m not a hard core Trekkie.  I watched all the original episodes twice when I was in high school and then put them away until... um, let’s just say it’s been a lot of years and leave my exact age out of it.  So enough time had passed that I was curious as to how my more mature eyes would see them, and they had the added bonus of updated special effects.  Actually, they are kind of odd, because they treaded a tough line, making it look much better than the original, but still really fake.  And they couldn’t do anything about the giant Space Lincoln that appeared toward the end. 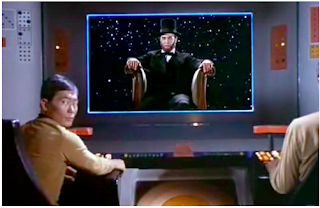 Let’s face it, that was the moment the original series jumped the shark.  See that look on Sulu’s face?  He’s saying, “dude, that the frak?  Seriously, what the frak, man?”
But still it was interesting to watch them all again, and especially to see how they originally envisioned Captain Kirk.  Originally he was actually much more reserved, much less hammy, and portrayed in Starfleet Academy as being a nerd who had his nose in the books all the time.  Which of course is very different from how he was depicted even in Season Three, or the movies, and especially the most recent Star Trek, although in the last case that difference can be justified by the change in continuity that occurs in that movie.  In the new timeline, Kirk loses his dad as he was being born, so he grows up rebellious instead of nerdy.  It makes reasonable sense.  Certainly more sense than Kirk being marooned on a planet and just happening to run into “Old Spock.”
Then I had heard that some Trekkies had some respect for the animated series, so I gave that a whirl.  When the birdman alien showed up, I ended that experiment.

(Yes, this really did happen.  And no, you can’t unsee it.)
And that was after finding out that there were life support belts that magically kept the crew from being suffocated in space, and personal force fields on everyone that never showed up before, as well as a security cannon on the bridge.  Who knew?  So…  way off canon.  Or cannon.
Which is too bad because an animated version, done well, might have actually been really good.  I mean animated special effects are cheaper than the real thing, right?  So if it was as well-written and animated as Batman: The Animated Series (don’t laugh, they won a few Emmys), it might have been good.
And then I shifted over to Star Trek: The Next Generation.  I hadn’t watched most of those episodes at all since the first run, and I was curious how I would see them now.  As memory served, the show kind of limped for the first few years and then got awesome with episodes so classic that they are part of pop culture.
And with me I like to watch everything with the captions on.  I don’t know why, but I do, an admittedly strange quirk for a dyslexic, but there you go.  And as I watched, I got the distinct feeling that the caption guy was screwing around…
Let me give you the set up.  Do you remember how the saucer could separate from the rest of the ship, carrying their families far from harm?  If memory serves that feature of the Enterprise D was promptly forgotten about after that.  I think the only other time it came up was in the movie Generations, where the bottom of the ship was blown up and the saucer ended up serving as a life raft for everyone.  Otherwise no one thought to get the families out of harm’s way again.  I mean if I am remembering correctly, even in the famous cliffhanger episode The Best of Both Worlds, when Picard was turned into a Borg, the Enterprise went after the Borg with the saucer attached.  If there is any time to get the civilian families out of the way, isn’t that it?
But in the premiere they made a big deal of the separation of the saucer from the rest of the ship and had a sequence where Commander Riker was required to manually dock the two back together.  And this is a screencap right in the middle of that scene where he is saying “all stations... prepare for reconnection.”  Only, well, look... 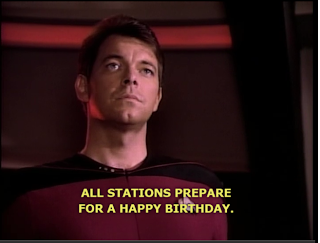