Did Brett Kimberlin Mock His Victim Carl DeLong in a Music Video?

First off, if you haven’t been following the Kimberlin Saga® let me suggest you start here.


But this post is written for those of you who are following along.  As I have told you before, Brett Kimberlin is a convicted terrorist known as the Speedway Bomber.  I have quoted this passage from Kimberlin v. White, 7 F. 3d 527 (6th Cir. 1993) before, but it is particularly important to pay attention to the details this time:
Kimberlin was convicted as the so-called "Speedway Bomber," who terrorized the city of Speedway, Indiana, by detonating a series of explosives in early September 1978. In the worst incident, Kimberlin placed one of his bombs in a gym bag, and left it in a parking lot outside Speedway High School. Carl DeLong was leaving the high school football game with his wife when he attempted to pick up the bag and it exploded. The blast tore off his lower right leg and two fingers, and embedded bomb fragments in his wife's leg. He was hospitalized for six weeks, during which he was forced to undergo nine operations to complete the amputation of his leg, reattach two fingers, repair damage to his inner ear, and remove bomb fragments from his stomach, chest, and arm. In February 1983, he committed suicide.
So one thing I have known about but haven’t mentioned yet, was his work with the band Op-critical.  Stephen Gutowski over at MRCTV has a pretty good backgrounder on this band:
It appears that sometime around 2006, several years after Kimberlin was released from prison, he joined a band named Op-Critical. The band's music can best be described as liberal alternative rock and they claim some of it has been featured at ACLU and Amnesty International events. Their music mirrors that of other little known liberal bands who trashed Bush in the later part of his presidency and would be unremarkable if it weren't for the fact that one of the guys playing guitar and singing is a violent criminal.
Take, for instance, the Op-Critical song titled Fear. The song describes Americans being fearful and "thinking that the plastic bag maybe isn't innocent" and how that undue fear is being used by Bush to control them. The lyrics mocking the fear of terrorist attacks would, again, be unremarkable for a late 2000s liberal band if they weren't sung by a man convicted of setting off bombs in a small American town and the music video didn't feature that bomber lurking around the Cleveland Park DC Metro station complete with shots of an unattended bag.
But when I looked at the video I saw something that Gutowski didn’t.  It wasn’t just a bag, but... 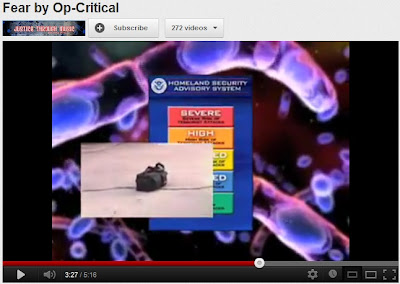 Do you see what I see?  Not just an unattended bag, but an unattended gym bag.  You know just like the one that maimed Carl DeLong.  So this man who placed a bomb in a gym bag—and by the way, left it at a high school football game, where children could have been hurt—is telling us not to be scared of unattended gym bags.  It is hard not to see that as a mockery of the crime he committed against Carl DeLong.
One of my favorite entries last Friday was by a friend of mine, Dustin (who has also been a victim of the Korrupt Kimberlin Krew’s harassment), who shared with us the suicide note of Carl DeLong.  If you haven’t read it, it is a must-read and genuinely powerful, as a father says goodbye to his family.
And Brett Kimberlin decided to mock how he took this man’s life, to mock the very fear that could have kept Carl DeLong alive.  If it had occurred to Carl DeLong that an unattended gym bag was a threat, perhaps he would have done something different and this wouldn’t have led him down a path that led him to take his own life.  Perhaps whatever pain the DeLong family has felt could have been avoided.  So the next time someone says that Kimberlin is reformed etc., remember that he actually mocked one of his victims in a music video.

Of course this is far from the only example of Op-critical’s music videos taking on new meaning when you know about its guitarist and vocalist’s criminal past.  For instance, Op-critical put out a song called Exile, described on its YouTube page as “Protest music video against torture and rendition. Contains actual torture footage.”  At about the 1:30 mark, the video shows Brett Kimberlin walking along, minding his own business when suddenly a black SUV filled with apparent government agents pulls up and captures him in the image on the right. 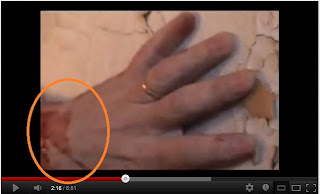 And that is followed by extensive footage of Brett Kimberlin being tortured, waterboarded, etc.  And get a load of this at the 2:16 mark:
It’s blood.  Presumably fake blood.  Which is pretty significant given that I have suggested before that his photographs of his supposed bruises were fake, perhaps by using make-up to create a fake image of a bruise, and now we see concrete proof that he knows people who know how to create realistic but fake injuries.  And I am not going to put any recent pictures of his face up on this blog, but if you go through the video you will see images of his face with fake wounds on it and then you will see the picture on the right.

And I wonder if it would have changed the point of view of anyone commenting on the video about how infuriated they were by our treatment of suspected terrorist if they knew that the star of the video was not a suspected terrorist, but a convicted terrorist.
Let’s watch the whole thing:
Update: Lee Stranahan looks at the Exile video and sees something I didn't: "he seems to be showing you how he sees himself; an unjustly imprisoned man who was tortured by brutal authorities."  I would quibble that we are really seeing how he presents himself; whether he believes that he was actually innocent of the bombings is beyond understanding.

And I will have to apologize for this next video.  Up until now there was an acceptable--not ":great," but "acceptable"--level of quality in the music, but this is just grating in the pitch of the singing.  But notice something in the opening footage.  It starts with Hitler declaring that the big lies are more likely to be believed—an ironic quote given Kimberlin’s record for honesty—but on top of that the very next images are of...  September 11, suggesting that he buys into the Truther "Reichstag fire" theory of 9-11 as an inside job.  Lovely:
And we get one final video from him.  It’s a remake of For What It’s Worth, only dedicated to the current Occupy movement: 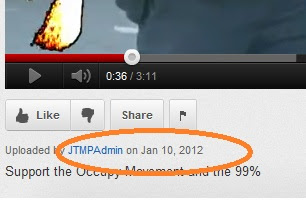 Which is unremarkable except for one detail.  Go to the YouTube page for it and look at the upload date:
Oh, lookie here (see right)!  On the day after I supposedly put him in the hospital and he was supposedly recovering from his grievous injuries, he was putting a music video on YouTube.
---------------------------------------
My wife and I have lost our jobs due to the harassment of convicted terrorist Brett Kimberlin, including an attempt to get us killed and to frame me for a crime carrying a sentence of up to ten years.  I know that claim sound fantastic, but if you read starting here, you will see absolute proof of these claims using documentary and video evidence.  If you would like to donate and help my wife and I in this time of need, please go to this donation page.  And thank you.
Follow me at Twitter @aaronworthing, mostly for snark and site updates.  And you can purchase my book (or borrow it for free if you have Amazon Prime), Archangel: A Novel of Alternate, Recent History here.  And you can read a little more about my novel, here.
Posted by A.W. at 11:59 AM