Via Breitbart.
Really guys, is it a smart to piss off this guy?

Anyway, so the ultimate geekgasm movie The Avengers is out today and the embargo on reviews has been lifted and it seems to be getting pretty good reviews, including Rolling Stone, which says:
It's also the blockbuster I saw in my head when I imagined a movie that brought together the idols of the Marvel world in one shiny, stupendously exciting package. It's Transformers with a brain, a heart and a working sense of humor. Suck on that, Michael Bay.
But apparently in the New York Times, A. O. Scott wrote a fairly negative review.  Hey, I haven’t seen the movie, but I admit to being offended by this just for the sheer snottiness of what he wrote:
Mr. Whedon’s playful, democratic pop sensibility is no match for the glowering authoritarianism that now defines Hollywood’s comic-book universe. Some of the rebel spirit of Mr. Whedon’s early projects “Buffy the Vampire Slayer,” “Firefly” and “Serenity” creeps in around the edges but as detail and decoration rather than as the animating ethos.
“I aim to misbehave,” Malcolm Reynolds famously said in “Serenity.” But for all their maverick swagger, the Avengers are dutiful corporate citizens, serving a conveniently vague set of principles. Are they serving private interests, big government, their own vanity, or what? It hardly matters, because the true guiding spirit of their movie is Loki, who promises to set the human race free from freedom and who can be counted on for a big show wherever he goes. In Germany he compels a crowd to kneel before him in mute, terrified awe, and “The Avengers,” which recently opened there to huge box office returns, expects a similarly submissive audience here at home. The price of entertainment is obedience.
I mean sheesh, the man is in danger of disappearing up his own arse.  And apparently Sam Jackson isn’t happy, tweeting:
#Avengers fans, NY Times critic AO Scott needs a new job! Let's help him find one! One he can ACTUALLY do!
Something tells me that he is going to get the entire team—Thor, Captain America, Iron Man, the Hulk, Hawkeye and the Black Widow—together and well, check out how awesome that would be...
...oh, um…  Okay, maybe it will just be Sam Jackson, then, bringing the awesome: 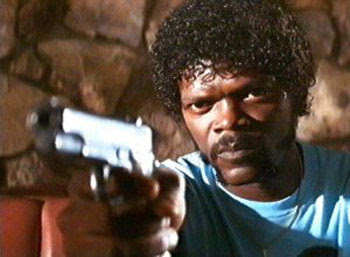 Of course for me I found IGN's interview with Clark Gregg the actor who plays Agent Phil Coulson in all of these Marvel movies...

(This guy)
…to be very enjoyable because he comes off kind of gawkish and gee-whiz about the turns his life have been taking, in a way that is really relatable.  Like take this part where he talks about how he became the glue that held all those Marvel movies together:
It was definitely I think something that evolved during Iron Man. It was not a big role, but there just was a purpose I think that it served and so by the end of Iron Man it had turned into this tremendously fun big role and nobody was more shocked than me when then they called and said, "Listen we want this guy in Iron Man 2 as well," and during one of the scenes in Iron Man 2 they said, "Tell them you have to go. Tell them you are going to New Mexico." And at the end of it I said, "What's in New Mexico? Where am I going?" And they said, "Oh s__t, Thor! Didn't anybody tell you? You're in Thor." I was like, "Sweet!"
And yeah he’s a total guy:
You know, you can never discount the pleasure of showing up to work with Scarlett Johansson and now Cobie Smulders. That's just a day that's easy on your eyes[.]
And for news purposes, and not at all for Rule 5 reasons, let’s examine the evidence, to see if he is right.  Here is Johansson: