Update: He has a new, feeble excuse.  See below.

I have long said that Twitter is the single best engine of self-beclownment ever invented.  Too many people tweet on impulse, hitting send before they think it through.  You know, sort of like how a smaller number of people carelessly send emails without paying attention.  So for many people Twitter is their unfiltered selves, and their true selves comes through.

And strap yourself in because it gets ugly.  The language is coarse, but it is necessary to convey the evil involved and for that I apologize:

Of course that wouldn’t be “rape rape” as Whoopi Goldberg imagined, but it is statutory rape in every civilized place in the world (indeed to a large extent in my mind the test of whether a place is civilized is whether they would legalize sex with a thirteen year old girl), and morally it is child rape, too.  A thirteen year old girl is just not ready for sex.

Now his profile describes him as a “New Yorker Fashion Editor.”  But apparently he either doesn’t work for the New Yorker as some thought, or he has never, ever published anything for them, because a full search of their website for his name turns up nothing and he has tweeted out denials that he works for them.

But he definitely seems to be working for WE Tv.  What?  You don’t know who WE Tv is?  Yeah, neither did I, but here’s their description from their website:

Every kind of family. All kinds of drama. That's life as we know it on WE tv network.

WE tv is family 2.0. It's the real, familiar stories that make us say "that could be me!" Featuring celebrity families you just can't miss and personalities you want to know more about like The Braxtons in Braxton Family Values, Joan and Melissa Rivers in Joan and Melissa: Joan Knows Best? and Shannen Doherty inShannen Says.

And nothing causes family drama like planning a wedding. Don't miss My Fair Wedding with David Tuteraand I Do Over with Diann Valentine.  Plus, everyone's favorite original drama queens, Bridezillas.

And this should clarify things further:

So it seems like as best as I can tell a women’s oriented reality channel.  So I am about as likely to enjoy that as a rash, but hey, to each their own.  There is plenty of room on the dial for them and for 7,000 other channels, of about twenty I might actually like.

But he is a star of one of their reality shows.  See, remember the mention of the show “Shannen Says”?  Well, he’s on that one, which is apparently a reality show about Shannen Doherty getting married, for the third time.  Which sounds perfectly horrid, but anyway, from his profile:

Native New Yorker, fashion editor/stylist Tim Bitici cites his teenage days of working at his father’s renowned Greenwich Village restaurant (Minnetta Tavern) as the inspiration for a career in fashion. It was the eclectic, artistic vibe of his surroundings that drew him into the fashion world. Tim began his career as a stylist for Glamour Magazine. His inherent sense of style, keen appreciation of fashion mixed with a strong work ethic pushed Tim on to the radar of top stylists at other magazines.

Not long after doing his first magazine cover, Tim traveled the world on a variety of shoots; Vanity Fair, GQ, NY Times Style and a plethora of celebrity styling jobs and advertising campaigns. For the last four years, Tim has been a Fashion Editor for A Magazine. Tim has also been working on music videos for artists like Madonna and Justin Timberlake, and has worked on numerous international advertising campaigns. Tim was first introduced to Shannen when styling her for a photo shoot, and the two hit it off instantly.

By the way, this is their contact page, if you want to let them know how you feel.  And if you are on twitter, so are they!  Be polite, so they can’t dismiss you as a crazy, but make it clear in no uncertain terms that this is unacceptable behavior.

In the meantime, it seems that Mr. Bitici (which I think is Italian for “whiny b----h”) is getting some criticism and is not reacting well.

For instance, here, he is not comprehending the problem:

Really, really not getting it:

@derekahunter it's pronounced "get a life". Oh and its twitter you freak.
— timBitici (@timBitici) October 12, 2012

He has an intelligent response to criticism:

And more profanity when someone points out that they have a screencap:

Lawyer extraordinaire Todd Kincannon gets in on the fun:

He gets some support:

@riggitybiggity lol. I don't even know why. What freaks these right wing bible thumping republicans are.
— timBitici (@timBitici) October 12, 2012

What is wrong with these people?  It was a vile thing to say.  He should apologize at the very least.

But that is the theme of the night: boorish behavior.  That certainly was on display when Ryan and Biden debated.  CNN counted over 92 times Biden interrupted and I cannot believe for a second that is going to go over well in middle America.  And his weird smirking couldn’t have helped.  Ryan, on the other hand, was in my opinion the right amount of assertive and probably came off as more of an adult than his much older adversary.  There is only one relevant measure on who wins a debate: whether it makes your side more likely to win.  I think it was a narrower, but still clear victory for Romeny/Ryan.

Update: Oh my… he is now pretending he wasn’t talking about Paul Ryan.

Well, except that is all he was talking about in his timeline as screencapped here: 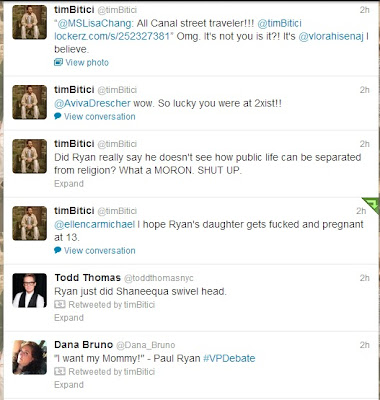 Notice the very next tweet was clearly about the debate (above the offending tweet) and referred to Paul Ryan as just “Ryan.”

And remember that tweet exchange with Todd Kincannon quoted above.  Kincannon said: “This Democrat wants Paul Ryan's daughter to be raped” and Bitici replied “not raped. Just Happily f----ed.”  (curse word censored.)  If he didn’t mean Paul Ryan, that would be the time to say it.

And in any case, is that a defense?  “Oh, so he wanted Ryan Reynolds’* future hypothetical daughter to be raped and not Paul Ryan’s daughter.  That’s much better.”  The problem is he was wishing rape upon a little girl.  He should take a lesson from David Letterman and apologize.

* Just picking another “Ryan” out at random.

And let me say something else.  In my heart of hearts, I don’t believe that any person supporting me has done any of the above.  But if any of you have, stop it, and if you haven’t don’t start.
Posted by A.W. at 12:43 AM