My (Quick) Review of the New NRA Game

In my last post I mentioned the infamously bad video game licensed by the NRA called NRA Gun Club.  To make it quick it sounds like all you do is take allegedly authentic guns to the range and shoot them.  Which is allegedly as boring as it sounds.

Well, God help us, there is a sequel.  It’s called NRA Practice Range.  I don’t know if it is available for more than the iPhone, but there you go.

First the good news.  It’s free.  You don’t have to pay a single red cent to own this thing, although you will have to pay money to unlock additional guns (you start with three).

Now the bad news.  It’s overpriced.  Get it?  Because it’s free?

Look I am not hostile to the NRA.  And at first blush this sounded like something that would be okay for a free app.  But no, this is so bad, I am deleting it the moment I am done with this review.  It’s literally not worth the space on your device. 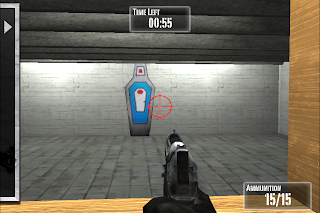 The basic set up is very simple.  You can shoot at an indoor range, and outdoor range and skeet shooting.  The indoor range is now moderately famous because you shoot targets that look like this (see left).

That is from the indoor range, and idiot Think Progress claimed these were coffin-shaped targets.  I don’t know if the author, Annie-Rose Stasser is ignorant, or she just knows her audience is ignorant, but here’s a hint: coffins don’t actually look like that.  They’re just targets, done in a vaguely human fashion because you are practicing to defend yourself.

By the way, as an aside, in the comments to this Think Regress article, they were deeply horrified and offended by the idea.  Then they launched into murder fantasies (while accusing the NRA of hypocrisy, no less).  One wrote:


Wonder how hard it would be to whip up a game with Wayne LaPierre, David Keene, and Ted Nugent's faces on the targets?

How about every right wing leader? I know it would make me feel a lot better about Congress if I could play a video game where Republican Congressmen are the targets. /sarcasm

how about charging into one of their meetings and gunning down anyone who gets in their way see how they like it. TIME TO STOP THE NRA.

And finally some logic:

Honestly, I think they look more like cocktail shakers. This is absolutely irresponsible, as it encourages shooting guns while drunk on cosmos. I can't believe that the NRA would so thoughtlessly incorporate unsafe practices into a phone app.

And other random silliness:

This comment was written with a quill pen of course.

Moving on.  So the indoor range is simply a bunch of these things pop up in seemingly random places.  I mean they don’t move up, or realistically pop out of the floor.  They just blink into existence, without so much as a *poof* to let you know they are there and then after some time they disappear.  And the goal is to hit as many of them as possible.  Just hit them, mind you.  There is no apparently scoring for accuracy that I could see.

The controls meanwhile, are rough.  You have two options.  The first is a gyroscope tilt control set up.  Which works really well for aiming, but then when you go to shoot, you have to kind of tap the screen and it only intermittently realizes you are trying to shoot.  The other option is to use a virtual analog stick and fire button.  In this case the trigger works better but the stick is just not responsive. 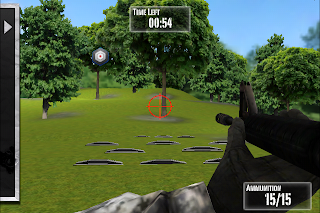 Of course it doesn’t really become a problem until you reach the Outdoor Range.  Here’s a picture of that (right).

That target you see basically pops out of the ground, goes up and then comes down.  And it does it really fast.  As in faster than you can cope with.  If you use the gyroscope, you’re going to go nuts with the hinky trigger because it will not shoot when you need it to and timing is vital.  And the analog stick is just hopelessly slow.

I fared better with the skeet shooting, and it was the closest to actually being fun.  But it wasn’t worth it.  And I miss the Duck Hunt dog.

Come to think of it, Nintendo should totally make Duck Hunt into an app.  Use the gyro as the movement and then a simple trigger.  That might be a lot of fun.

Back to this game, each range allows for three different guns, one of which is free and the other two which is $0.99.  But honestly I don’t see nearly enough fun here to justify that.

It also serves as a vehicle to promote the NRA itself.  During the loading screens (and there are a lot of those—this is a slow app) it will give you either NRA facts or gun safety tips.  And of course the front page has links to information about the NRA, gun safety training classes, etc.  They hope to recruit people with this.

Of course if they wanted to do that, they should have done a much better job with the app.  Simply awful.

But if they fix the controls and stop it from being so “crashy,” it will be just okay.  Of course if you want a better “pointless shooting” app, you could try Zombie Gunship, where you shoot zombies from a plane.  It’s a buck today, but it was free for me, with all kinds of things like progression and in-game goodies.  If you are looking for a little dumb fun while waiting at the pharmacy counter, or something like that, you could do much worse.

P.S.: Over in the App store the reviews sadly are about 99% based on what you think of the NRA.  Which I guess isn’t so bad with a free app, but it is annoying.

And let me say something else.  In my heart of hearts, I don’t believe that any person supporting me has done any of the above.  But if any of you have, stop it, and if you haven’t don’t start.
Posted by A.W. at 1:55 AM