Update and Major Correction:  What can I say?  I strive to be accurate but sometimes I get things wrong.  And when I do, I believe the correction should be as prominent as the original mistake and you should generally be open about making your mistake.
I made a mistake in my original version of this post.  I wrote that Brett Kimberlin appealed the case of Kimberlin v. Norton where he got a peace order against John Norton for about a month.  But as “Anonymous” in the comments pointed out, there was no indication in the electronic records who filed the appeal.  So it could have just as easily been John Norton as Brett Kimberlin.
I could blame a lack of caffeine or the fact that a family member first told me that, planting an assumption in my mind that I left unchallenged.
I could point out that in part my assumption was based in part on the fact that it made very little sense for Norton to appeal.  The peace order will have expired long before the circuit court is likely to hear the appeal, so at best he is likely to get a moral victory only.  I guess that is valuable to him, too, but I think he could get the same practical benefit in the “court of public opinion” by just showing anyone who asks this video...
...and then any reasonable reader will know not to trust any claims by Brett Kimberlin.  But the point is I didn’t think that was very logical on Norton’s part to go to all this trouble for just a moral victory and thus I was quick to believe Kimberlin filed the appeal instead.
But no, the buck stops here, with me, Aaron Walker.  It was my fault.  And as a result of my fundamental error, almost every word in the original post is unsupported to a degree.  Of course, if I find out that Kimberlin did file the appeal, then everything I wrote will be correct, but even if I turn out to be accidentally right, it doesn’t justify what I wrote today.  Right and wrong is determined by the information at your hands at the time, not with 20/20 hindsight.
So the entire original post—including the original title—is below the fold, in the name of openness.  And I thank the anonymous commenter for pointing out my error, and I apologize to my readers for the error.  Indeed, if Brett Kimberlin is still obsessively reading everything I write about him to a general audience, I apologize to him, too.
Because while there is a good case to be made that Brett Kimberlin is “defamation proof”—that is, his reputation is so poor it is impossible to further defame him—I still strive to be as accurate as possible in this story.  And so in that spirit I reiterate that if anyone comes forward (in email or in comments) with proof that I got any fact wrong—or in his case, proves something I stated was unsupported by known facts—I will promptly and prominently correct the error, just as I have.  And a note to Kimberlin’s defenders: an assertion supported only by Kimberlin’s honor is not proof of anything.
Anyway, the original but incorrect post is below the fold.  And once again I apologize for the error, and thank the commenter who pointed it out.

Apparently getting month-long peace order without meeting the statutory requirements didn’t persuade Kimberlin to quit while he was ahead.  Kimberlin has appealed that decision. 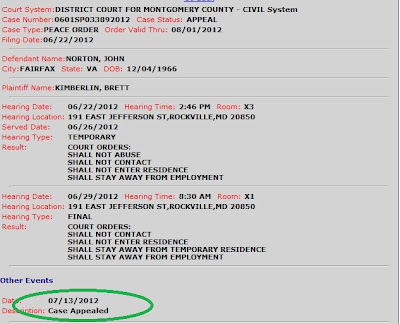 Just to be clear, Kimberlin is appealing from the order he obtained against John Norton, because I guess he doesn’t think it goes for long enough.  You know, for a guy who claims it is harassment to cross examine him, especially if you merely ask him about whether he had any involvement in my SWATting, he sure likes to go to court and subject himself to that “harassment” a lot.
---------------------------------------

My wife and I have lost our jobs due to the harassment of convicted terrorist Brett Kimberlin, including an attempt to get us killed and to frame me for a crime carrying a sentence of up to ten years.  I know that claim sounds fantastic, but if you read starting here, you will see absolute proof of these claims using documentary and video evidence.  If you would like to donate and help my wife and I in this time of need, please go to this donation page.  And thank you.
Follow me at Twitter @aaronworthing, mostly for snark and site updates.  And you can purchase my book (or borrow it for free if you have Amazon Prime), Archangel: A Novel of Alternate, Recent History here.  And you can read a little more about my novel, here.
---------------------------------------
Disclaimer:
I have accused some people, particularly Brett Kimberlin, of reprehensible conduct.  In some cases, the conduct is even criminal.  In all cases, the only justice I want is through the appropriate legal process—such as the criminal justice system.  I do not want to see vigilante violence against any person or any threat of such violence.  This kind of conduct is not only morally wrong, but it is counter-productive.
In the particular case of Brett Kimberlin, I do not want you to even contact him.  Do not call him.  Do not write him a letter.  Do not write him an email.  Do not text-message him.  Do not engage in any kind of directed communication.  I say this in part because under Maryland law, that can quickly become harassment and I don’t want that to happen to him.
And for that matter, don’t go on his property.  Don’t sneak around and try to photograph him.  Frankly try not to even be within his field of vision.  Your behavior could quickly cross the line into harassment in that way too (not to mention trespass and other concerns).
And do not contact his organizations, either.  And most of all, leave his family alone.
The only exception to all that is that if you are reporting on this, there is of course nothing wrong with contacting him for things like his official response to any stories you might report.  And even then if he tells you to stop contacting him, obey that request.  As you will see by the time I am done telling my story that this is a key element in making out a harassment claim under Maryland law—that a person asks you to stop and you refuse.
And let me say something else.  In my heart of hearts, I don’t believe that any person supporting me has done any of the above.  But if any of you have, stop it, and if you haven’t don’t start.
Posted by A.W. at 12:22 PM