Man, how is it that no one in the White House knew this was wrong?
With victory at hand, Lincoln could have sought revenge. He could have forced the South to pay a steep price for their rebellion. But despite all the bloodshed and all the misery that each side had exacted upon the other, and despite his absolute certainty in the rightness of the cause of ending slavery, no Confederate soldier was to be punished, Lincoln ordered.
(Source.)  Um, no, Mr. President.  Just off the top of my head there was Henry Wirz, executed for war crimes at Andersonville.  And I could be wrong, but I think there were others. 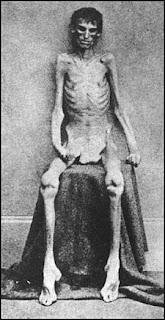 Maybe I am just too big of a history geek, but how does he not know this?  I mean Wirz was one of the early precedents for punishment for war crimes after a war, and after the holocaust people would look back at Andersonville with a new set of eyes.  The sight of those soldiers looking literally like walking skeletons took on new meaning:
Take a long look and you will get why there was so much rage at the South after the Civil War.
(Yeah, that's a little off topic, but those who suffered at Andersonville deserved to be remembered).
Posted by A.W. at 7:03 AM