First, let us remember that he spent twenty years in a racist church.  As James Taranto explained several years ago, Reverend Wright’s Trinity United Church of Christ, proclaims that it follows “Black Liberation Theology” as expounded on by James Cone.  The words “black” “liberation” and “theology” by themselves don’t sound necessarily racist.  The reality is, for instance, that Christianity, as it was fed to slaves and slaveholders, was one of black suppression, so there is a theological need to counter that.  But Cone goes well beyond that, proclaiming that
Read more »
Posted by A.W. at 2:31 PM No comments:

Updates on Roger Shuler: No Longer a Prior Restraint?

That question mark is correctly placed.  I will attempt to reach out to some parties today but according to a local CBS affiliate, the prior restraint element of the injunction may have been removed.

To recap (and I will put it in bold when the recap ends, so you can skip to it if you don’t need the review), Roger Shuler is frankly a crank who writes a blog called the Legal Schnauzer.  I mean seriously, just read where I explored his writings: the man is paranoid, finding conspiracies in the most ordinary workings of the courts.  He was also a cheerleader for Brett Kimberlin’s attempt to suppress my freedom of expression last year and we have come to suspect he is an unappreciated member of Team Kimberlin.  John Hoge has taken to calling him the Jailbird Advocate General, sticking with his Naval-themed nicknames.

And as you know, he was arrested.  Basically he wrote a series of posts accusing Robert Riley Jr. (son of a former governor of Alabama), of having an affair with a lobbyist named Liberty Duke, conceiving a child with her, and then procuring an abortion (and her silence) by some shady finances.  These posts cited unnamed sources, without any specifics as to dates, times, locations, etc. and he has not named them in any other context.  And not only do the alleged paramours deny the affair, but Riley has claimed he is medically incapable of fathering children at the time he was alleged to have done so, but he would not elaborate whether that meant he had a vasectomy or what.

Riley and Duke then sued Shuler for defamation.  As the case went forward, they got the records sealed—which I think is unjustified—and then Riley sought an injunction against him.  They held a preliminary injunction hearing.  Shuler was informed ahead of time that this would be happening, but claimed the service was invalid.  I find his argument specious and even if he was right, it was still stupid for him to skip the hearing.  Anyway, so the court found that he had defamed the plaintiffs and put out preliminary injunction.  That injunction contained three commands, more or less: 1) take down the claims about the affair/abortion, 2) do not repeat those claims in the future, and 3) do not otherwise defame Riley and Duke in the future.

It’s that third part that is most noxious.  Of course defamation is not protected speech, but the problem is that it is likely to chill speech that is protected. I mean how would Shuler be certain if he wrote something negative about either of them that the courts would or wouldn’t find it to be defamatory… if Shuler had any tendency to obey the courts.  And apparently Shuler did not.  He did none of it and thus eventually the court put out a warrant for him to be arrested for contempt of court.  When he was arrested, he allegedly resisted arrest and was charged for that as well.  And to this day he is being held without bail.

So ending the recap, the ACLU decided to intervene.  They were not going to weigh in on the truth or falsity of Shuler’s charges, they have filed a memorandum in which... holy crap, I was cited!  Cool!  I have never gotten an ACLUalanche before!  You can read it here.  But the upshot of the brief is to say that the injunction shouldn’t have been issued and the case shouldn’t have been sealed, both points I agreed with.  The Reporter’s Committee for Freedom of the Press wrote a letter, but it is not materially different from the ACLU memorandum and not being an official filing, I am not sure how effective it is.  At best it simply says to the judge that “we as a group are disturbed” which has some value.

Well, I had a nice little plan laid out for myself: write a little more about the Shuler case, and then write a post cataloguing another lie in Brett Kimberlin’s ridiculous RICO case against me and half the internet and then John Hoge manages to get an arrest warrant on Bill Schmalfeldt.  So there goes my plans for the evening.

So to recap a little bit, about five months ago Bill Schmalfeldt was found by a Circuit Court in Carroll County, Maryland, to have harassed my friend John Hoge.  In the name of full disclosure, I feel he harassed me as well, and he harassed my friend Lee Stranahan, too, and his wife.  And I feel all of it was motivated by his devotion to Brett Kimberlin as demonstrated by this tweet: 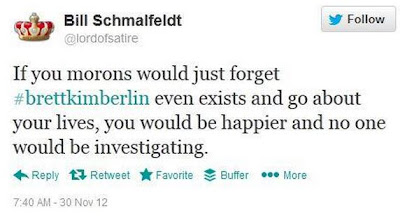 Of course, his characterization of his tweeting as “investigation” is deceitful.  For instance, is there anything investigatory about these harassing tweets preserved over at paste bin?  Indeed, you can see how little journalistic integrity he has simply by reading this post.

A lot of times when we talk about election-related fraud, we are talking about dead people voting, dogs voting, people voting early and often and similar kinds of outright criminal conduct.  And all of those are rightfully considered to be serious issues, but there is another kind of election fraud we have to worry about.  This story has been making the rounds, but I wanted to talk about it in my return from bogging haitus:

HOUSTON -- Dave Wilson chuckles as he talks about his unorthodox political campaign.

Still, he figured he'd have fun running, because he was fed up with what he called "all the shenanigans" at the Houston Community College System. As a conservative white Republican running in a district whose voters are overwhelmingly black Democrats, the odds seemed overwhelmingly against him.

Then he came up with an idea, an advertising strategy that his opponent found "disgusting." If a white guy didn't have a chance in a mostly African-American district, Wilson would lead voters to think he's black.
Read more »
Posted by A.W. at 1:03 PM 4 comments: