Another Liberal Accuses Others of Racism, Proves to be Racist in the Attempt

Let me introduce my reader to a new character.  This will take some verbiage, but I promise you it is fun.  And funny!  And maybe insightful.  Anyway, I know his real name, I even know his nickname, but out of some level of kindness, I will call him Stalker-boy.  You see I first ran into him around 2002-2003 tangling with him on the message boards of Findlaw.com.  Then later I went to a site called Freespeech and blogged there for a while.  And suddenly who shows up?  Stalker-boy.  I quit Freespeech for a while, quit blogging entirely, got busy and then eventually started this blog.  And guess who shows up in my email inbox?  Yep, Stalker-boy.  Indeed, it is apparently his endless desire to find me wherever I am on the internet that earns his nom de plume.
So Stalker-boy and I were arguing about Shirley Sherrod and he made an off-hand comment about Mark Williams being “disgraced.”  Williams, you might know, wrote a piece satirizing the NAACP imagining a letter by their President Ben Jealous saying that “colored people” like them wanted slavery reestablished.  It was satire of the variety Jonathan Swift would engage in, his point being to 1) mock the fact that the NAACP has the word “colored” in its name, and 2) to suggest that by following Obama they were establishing a form of slavery, albeit a race neutral one.  The first joke is feeble, yes, and the second argument is extreme.  But citing it for the proposition that the man is racist, is like citing A Modest Proposal for the proposition that Swift thought human flesh was delicious.
Or gee, its like taking Franken imagining a sexual encounter between Newt Gengrich and an Asian woman, employing many stereotypes of Asian woman, as racist.  I mean if Williams is racist, then Franken is, too, right?
Now, I don’t know jack about Mark Williams, this supposed leader of the Tea Party movement.  I never heard of the guy until the controversy over the letter blew up.  So for all I know, there might be pages and pages of racist shit the guy said.  But this is not the proof of it.
So I said to Stalker-boy that it was just a satire and he replied by saying that there was more evidence of William’s racism, than just the satire.  Like what?  Well, he explained: “Calling Allah, the deity of millions of peace-loving people, a ‘monkey-god’ (i.e., Allah's followers are monkeys) was particularly racist.  Or was that ‘satire’ too?”
Now, for the really hilarious part.  This claim that it was racist to say this, is itself racist.  That is in claiming Williams is a racist, Stalker-boy outted himself as a racist. 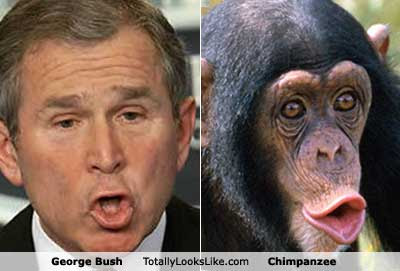 It makes me think of a great line from Jonah Goldberg when discussing silly claims of racism in The Lord of the Rings:
One is tempted to ask who is the real racist here? On the one hand we have people — like me — who see horrific, flesh-eating, dull-witted creatures with jagged feral teeth, venomous mouths, pointed devilish ears, and reptilian skin, and say, "Cool, Orcs!" On the other hand we have people, like Mr. Yatt, who see the same repugnant creatures and righteously exclaim "black people!" Maybe he should spend less time vetting movies for signs of racism and more time vetting himself if, that is, he free-associates black people with these subhuman monsters.
Ditto for our Stalker-boy.  Who is the real racist?  I see a guy mocking a deity and you see a cut against dark-skinned people.  Who is the real racist?
But then finally he did manage to find a racist statement from Williams.  Let me quote it for you, in full.  He was telling about how he used to help disabled veterans move from into the workforce, and find housing and the like.  And one day he had a black man come in, in a wheelchair, saying his landlord was about to evict him because he was handicapped.  And this is how Mr. Williams describes this encounter:
So I took him to a black lawyer that we had -- that had...attended some of the training that we had provided, because the Americans with Disabilities Act had just been enacted. So I figured if I take him to one of them that his own kind would take care of him.”
Pretty racist, huh?  I mean sure, later when it became clear that this black lawyer was not doing the job, he realized he had to intervene and made sure the man got the help he deserved.  And he said that it showed that black people and white people must work together.  But still to say today, in 2010, that black people are not “his own kind” was pretty racist.
Oh, except Mark Williams never said that.  Shirley Sherrod did.  Or rather, I switched the colors and changed Chapter 12 to the Americans with Disabilities Act.  These are her actual words:
“So I took him to a white lawyer that we had -- that had...attended some of the training that we had provided, 'cause Chapter 12 bankruptcy had just been enacted for the family farmer. So I figured if I take him to one of them that his own kind would take care of him.”
Now I didn’t do that head fake to our Stalker-boy.  Nope, I presented it straight, and said that even a child could see “that she doesn’t think white people are her kind.”
He replied: “And you do?”
Yes, as a matter of fact I do.  I remember a story President Bush told after 9-11, when the Afghanistan war was new and Iraq was a while off.  I am going by memory, so forgive me if I am a little wrong, but I think I am getting the main beats right.  Bush had visited an aircraft carrier, and he saw two bombs on one bomber.  One said FDNY.  The other said, NYPD.  So Bush approached the pilot and asked, “did you have any connection to any of the people who died on 9-11?”
The pilot’s reply was powerful.  “Yes.  They were Americans.”
Yes, she is one of my kind.  She is an American.  Even racist and all that, she is still an American.  I consider African Americans as much my kind as any one of any other color.
And you, Stalker-boy, don't?
I mean to discriminate means literally to classify.  To classify according to race, therefore, is racial discrimination.  But she classified those who were black as “her kind” and those who were white as “his kind” and our little Stalker-boy can’t see any racism, there, despite the fact she classified people, she discriminated among them, by race.
And isn’t that a perfect example of the modern left’s hypocrisy on the subject?  They have no trouble finding dog whistles and racial coding in the most innocent-sounding thing.  But a person says that a person of another race is not her kind because of his race, and they can’t see the bigotry.  At least not if noticing it would harm the liberal cause, I guess.
And the final question is, are people like this really oblivious to their hypocrisy?  Or are they just full of shit?  Are they blind to their double standards, or merely hoping we will be?
Sidebar: Okay so what did he say to the point that if Williams’ satire is racist, so is Al Franken’s?  The answer, he said, was that “he was, at the time, a paid comedian.”
You know, because when you are a comedian, you get a government issued “license to satire” that then allows you to say really racist things and get away with it.  But only licensed satirists can do that.  If you do it on your own, well, you are not allowed to disavow your words however clearly satirical they are.
In short, I am fucked.
(note: the last two paragraphs were satire.  But not government licensed satire.)
Posted by A.W. at 11:20 PM