The Latest Anti Muslim Bigot to Come Out Against the GZM is... Rima Fakih, America’s first Muslim Miss U.S.A.? 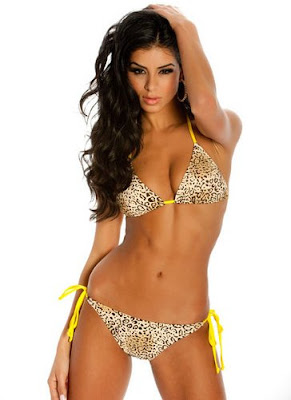 This is only the latest and easily the sexiest example of Muslims who have come out against the GZM.  I mean, besides the crazy ones who claim the Jews are responsible.
So Pelosi, do you want to investigate her, learn all the intimate details of her life, and all that?
No, actually I am wondering, because if you need volunteers...  well, I am married, but my brother-in-law would probably be more than happy to help!  And if any of you patriotic males, or lesbians, would like to start the investigation, this would seem like a good place to start.
In more serious GZM news, there is a claim that very damaging audio tapes are about to drop, involving radical statements by the imam who wants to build this.

Update: Over at Patterico there is a regular commenter called “ColonelHaiku” who likes to post humorous Haikus.  When I shared this story over there, he wrote:
Colonel declare his
chubwa on Ms. Fakih months
ago it still on!
To which I responded: “I could be wrong but I believe the commercials for Cialis tells you that you should seek medical attention at the four hour mark.”
To which he responded:
Colonel must sign off
not enough blood go to head
getting hard to…typ…
So, um, take those commercials seriously, folks.  (Source.)
Posted by A.W. at 9:43 PM