Sen. Max Baucus: I Wrote the Health Care Law, But I Didn’t Actually Read it

Today’s beat-your-head-on-the-nearest-wall moment comes from Max Baucus (Democrat-Mont.-Derelict-in-his-Duty).  Apparently he wants us to believe he somehow wrote it without reading it.  And I know I have been saying this a lot, but, yes, really:
Judy Matott asked Baucus if he would work to improve Libby’s image, and then asked him and Sebelius, “if either of you read the health care bill before it was passed and if not, that is the most despicable, irresponsible thing.”
Baucus replied that if Libby residents assembled an economic development plan, he would do what he could to help, and he took credit for “essentially” writing the health care bill that passed the Senate.
“I don’t think you want me to waste my time to read every page of the health care bill. You know why? It’s statutory language,” Baucus said. “We hire experts.”
So I guess he is like a monkey at a typewriter, then, bashing the keyboard and hoping something good happens. 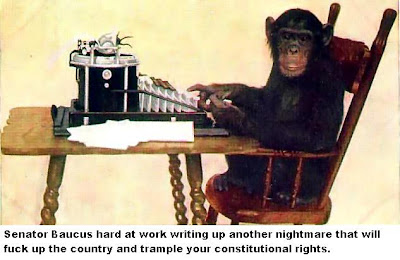 And I will note that most versions of that metaphor state that it will take at least a million monkeys at a million typewriters, typing for a million years to produce anything of value.
So you wrote it, but the actual reading, etc. was done by experts?  Well, gee, Mr. Baucus, WHY DON’T WE HIRE THEM TO BE OUR SENATORS?  I mean if you guys don’t read, understand and vote on bills based on that understanding, why don’t we pick senators who will?  You know, cut out the middle man.
Seriously, if you don’t actually read the bills, what are you doing there, you waste of space?
And don’t worry kiddies its not like those experts could ever slip anything past those congressional idiots, right?  So you don’t have to worry about those experts taking advantage of their inattention to slip something vile into the law..
And, if you are one of those experts, do America a favor and embarrass these people.  Trick these people into passing something with a line like, “And Congresspersons shall hereby wear clown-noses when debating bills involving appropriations.”  You will show the people in charge are not paying any attention, and Democracy will thank you, and who knows?  Really funny crap could happen.  They might have to wear clown noses when they debate, which is ironically appropriate.
Posted by A.W. at 11:44 AM