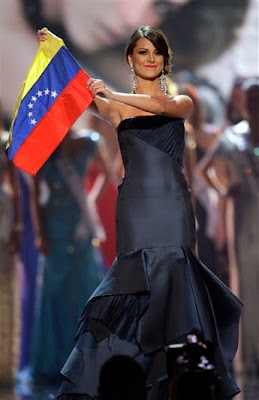 You know, I haven’t watched a beauty pageant in years but with all this stuff going on in them, I might have to change my mind.  IBD explains that
On her final catwalk, the ranking Miss Universe, Stefania Fernandez, suddenly whipped out a Venezuelan flag in a patriotic but protocol-breaking gesture.
Fernandez waved her flag for the same reason Americans waved theirs after 9/11 — to convey resolution amid distress. Her flag had seven stars, significant because Chavez had arbitrarily added an eighth, making any use of a difficult-to-find seven-star banner an act of defiance.
Now they go on to suggest that this is all about violence in the country.  Well, I am skeptical of that, but certainly it seems like a rebuke of Chavez of some kind.
Now of course starlets, models, singers, etc. are not the best students of political theory.  I mean, gee, Madonna, can you explain to us the merits of capitalism v. socialism as you pretend to finger yourself on stage?  And, um, you are pretending, right?  Right?
And further the recent politicization of these pageants need to stop.  Its all elaborate bullshit, to tell the truth and these things are struggling to stay relevant.  I mean look, this started out as a way for men to oogle women, okay?  But they wanted to at least pretend it wasn’t just that so they started asking the kids how they would feed the world and similar crap.  So then for some reason people misinterpreted it as these women having a point of view that mattered.  No, sorry ladies, you don’t.  There I said it.
Which is not to say they are all stupid or something like that.  But they are not selected for their intelligence, now are they?  Its like a Paul Westerberg song went, “You’ve got brains...  all the way down.”  So if the winner is smart, its coincidental.  Yeah, I said it.
Which is why they find themselves today in such a predicament.  As porn, well, its probably got the same problem all porn has these days: endless free porn on the net.  And if you take away the porn factor, well, what is left?
And then if you inject politics into it, well, then it gets really tedious.  The fact is I don’t care what Miss California thinks about gay marriage.  I also don’t get why Perez Hilton is judging a female beauty pageant.  Its like a Priest claiming to be a marriage counselor.  There are some jobs a person is just not qualified for.
But that begs the question, why did I post this at all?
Honestly I have a soft spot for anyone standing up to a dictator.  Crazy that.
--------
Oh, and then why did I make a big deal about Miss USA opposing the mosque?  Because regardless of who she is, she rebuts the claim that all opponents of the GZM are bigots just because of who she is.  And how can I say this.  AQ would force her to wear a burqa, and putting that picture up reminds you of the stakes, of what kind of society we are fighting for in this war on terror.
Posted by A.W. at 1:25 AM