So apparently this is the theme of the day, bigotry towards Asian Americans.  Indeed, when I was watching last weekend’s Saturday Night Live, it was the subject of the opening sketch:
And yes, that NY Post headline, “Amasian!” is real:

And it’s pretty repugnant.  What does his race have to do with anything?
Well, then again this story suggests a certain relevance, from Cheaper Than Therapy:
A condensed version of where he came from:  Jeremy Lin was a high school basketball star in Palo Alto California.  Strangely enough, he was not recruited after his senior year, but Lin still loved the game and sent his resume with DVD highlights to all the ivy league schools, Cal, Stanford, UCLA and Pac 10 schools.  A few schools offered him a walk on position, but it was Harvard that took the time to evaluate his game and offer him a position (Ivy League schools don't offer athletic scholarships.)
Even though he had a great college basketball career, he went undrafted in the 2010 NBA draft.  On July 21st, of that same year, Lin signed a contract with the Golden State Warriors.  He had a bit of a cult following, but his success never really took off.  He then had a short stint with the Houston Rockets. He was basically cut by both teams.  On December 27th, the New York Knicks claimed Lin solely as a backup.  He was living on his brother's couch, but never gave up.  On February 4th of this year, Lin's life would change forever.  He was put in the game against the Nets because the night before, the Knicks blew a 4th quarter lead over the Celtics.  He scored 25 points against the Nets.  The next game he played against the Jazz and had 28 points.  On the 10th he had 38 points, leading the Knicks to a win over the Lakers.  Which led us up to last night's amazing 3-point shot and all the great headlines.
Now the author of that, Kirby, says this is a great inspiration to kids to keep at it and they will get better, etc.  Uh, maybe, or maybe the story is that this guy was always going to be great but people kept failing to give him a chance because of his race until one day he got a chance to prove himself and then he promptly started kicking ass.  Which is kind of inspirational, too.  I don’t know enough about the story to say it is definitely one or the other, but it’s a theory that fits the facts.
And then we have the weird reaction to him.  I mean really depends on what is driving it.  It might be like the story of Tiger Woods (before he had his bimbo eruptions) where everyone loved the fact that a man was kicking all kinds of ass on courses that literally would exclude him normally because of his race.  There is a certain catharsis in that, a positive schadenfreude.
But it seems more like that they can’t believe an Asian dude can play ball this good.  So you get that “Amasian!” headline.  And when Lin didn’t do so well, two guys used the phrase “chink in the armor.”  One guy was fired, the other suspended.  Max Bretos did it live on the air but pointed out later his wife was Chinese.  Um, okay.  He was suspended.  Anthony Federico, meanwhile, did it in print, but in his defense he said he had done it a hundred times, presumably with non-Asians involved.  He was fired.
The reality is that this is a word that has a racist connotation and a non-racist connotation a point that Frank Wu emphasized once, writing: 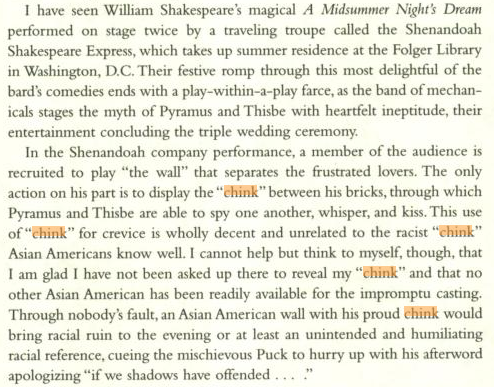 He goes on to explain why this kind of experience makes him more sensitive to recognizing where inadvertency occurs: 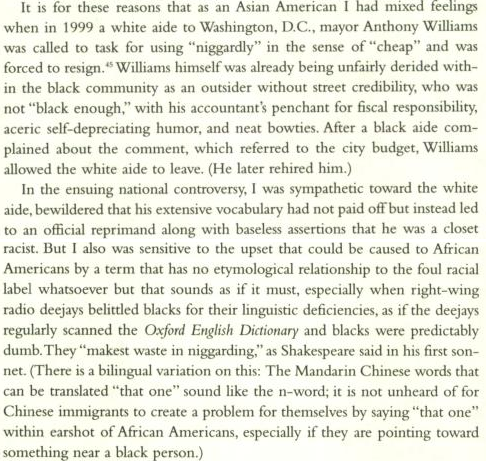 You can find all this in his excellent book Yellow: Race in America Beyond Black and White p 24-25.  Or well the first few chapters are excellent a tour-de-force, but then it starts losing its focus.  Still reading it you will gain a new appreciation of the prejudice that Asian Americans face, including a rare example of statistical proof of the existence and impact of racism.  For instance, have you ever heard that Asian American households make just as much as white ones?  This is often cited as evidence that people can get over racial discrimination.  Only there is one problem: Asian American households have more breadwinners, on average, than white ones.
I don’t know or care to pretend I know what was in Bretos or Frederico’s hearts.  If they were clueless of the racial connotation of those words, then their “sin” was in disregarding Lin’s race and treating him just like anyone else, which doesn’t seem like much of a sin when you think about it.  Personally I think I would have looked them in the eye, asked them what they meant by it and if they convinced me they sincerely didn’t mean anything by it, let them off with a warning.
To respond otherwise is just linsane.
Sorry.  I’m going to stop doing that now.
Hat tip: Patterico.
---------------------------------------
Follow me at Twitter @aaronworthing, mostly for snark and site updates.  And you can purchase my book (or borrow it for free if you have Amazon Prime), Archangel: A Novel of Alternate, Recent History here.  And you can read a little more about my novel, here.
Posted by A.W. at 9:57 PM

Email ThisBlogThis!Share to TwitterShare to FacebookShare to Pinterest
Labels: racism