Just a Reminder: Brett Kimberlin Still Wants to Shut Me Up

I found out earlier today that when my lawyer informed Kimberlin that I obtained my stay, that Kimberlin wrote back this response:
From: Justice Through Music
To: Reginald Bours
Sent: Mon, Jun 25, 2012 12:11 pm
Subject: Re: Your peace order against Aaron Walker in the Circuit Court, Case No. 8444D
Again, I want to be left alone by your client.  That is my demand as required by Galloway and the criminal harassment statute.  His false narrative that I framed him is defamatory and inciting extremists to threaten me.  He is responsible for their conduct.  I will not hesitate to seek additional peace orders or criminal harassment charges if he does not leave me alone.
Actually, what Judge Rupp necessarily found is that if I write to a general audience, and did not incite violence or lawlessness against anyone—as defined in Brandenburg—that I was not responsible for the conduct of third parties.  If they harass Kimberlin, by all means Kimberlin should pursue appropriate legal recourse against them, but not try to pretend that I am somehow responsible for third parties over which I have no control.  I am not responsible for the conduct of anyone but myself.
Not even for the ultra-scariness that is Glenn Reynolds:

That was a picture of Glenn Reynolds that made its way into Exhibit E of Kimerlin’s response to my motion for a stay. 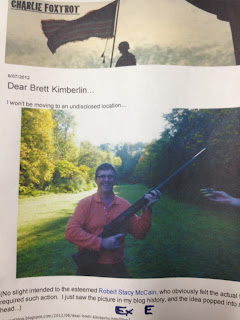 That is a sloppy screenshot taken from Charlie Foxtrot, a blog I never heard of until I Googled the quote “No slight intended to the esteemed Robert Stacy McCain” and it came up on Monday morning as I was writing down thoughts for my attorney to rebut the dishonesty of Kimberlin’s response.  Later the Lonely Conservative figured out where the picture originally came from:
Is it a threat?  It seems like nothing more than a declaration that if Kimberlin places him in danger, he is ready to defend himself—which is something you are allowed to do under the law.  You’re allowed to say you will do what the law allows you to do—defend your life, if necessary.
And besides look how cheerful Mr. Reynolds looks!  Who could be scared of that?
Now if you wanted a scary picture of Glenn Reynolds...

Via IMAO.
---------------------------------------
Disclaimer:
I have accused some people, particularly Brett Kimberlin, of reprehensible conduct.  In some cases, the conduct is even criminal.  In all cases, the only justice I want is through the appropriate legal process—such as the criminal justice system.  I do not want to see vigilante violence against any person or any threat of such violence.  This kind of conduct is not only morally wrong, but it is counter-productive.
In the particular case of Brett Kimberlin, I do not want you to even contact him.  Do not call him.  Do not write him a letter.  Do not write him an email.  Do not text-message him.  Do not engage in any kind of directed communication.  I say this in part because under Maryland law, that can quickly become harassment and I don’t want that to happen to him.
And for that matter, don’t go on his property.  Don’t sneak around and try to photograph him.  Frankly try not to even been within his field of vision.  Your behavior could quickly cross the line into harassment in that way too (not to mention trespass and other concerns).
And do not contact his organizations, either.  And most of all, leave his family alone.
The only exception to all that is that if you are reporting on this, there is of course nothing wrong with contacting him for things like his official response to any stories you might report.  And even then if he tells you to stop contacting him, obey that request.  As you will see by the time I am done telling my story that this is a key element in making out a harassment claim under Maryland law—that a person asks you to stop and you refuse.
And let me say something else.  In my heart of hearts, I don’t believe that any person supporting me has done any of the above.  But if any of you have, stop it, and if you haven’t don’t start.
---------------------------------------
My wife and I have lost our jobs due to the harassment of convicted terrorist Brett Kimberlin, including an attempt to get us killed and to frame me for a crime carrying a sentence of up to ten years.  I know that claim sound fantastic, but if you read starting here, you will see absolute proof of these claims using documentary and video evidence.  If you would like to donate and help my wife and I in this time of need, please go to this donation page or use the PayPal buttons on the right.  And thank you.
Follow me at Twitter @aaronworthing, mostly for snark and site updates.  And you can purchase my book (or borrow it for free if you have Amazon Prime), Archangel: A Novel of Alternate, Recent History here.  And you can read a little more about my novel, here.
Posted by A.W. at 11:38 PM