My Review of The Dark Knight Rises: The Baneful Threat of Occupy

So last night I went to see The Dark Knight Rises.  I’ll keep things spoiler-free above the fold.
First, did I like it?  Yes.  Look with a lot of these things, you have to manage expectations.  A thing can be so big in your mind that nothing that follows can be appreciated.  So, for instance, I loved the hell out of The Dark Knight and if you are not going to be happy unless Rises tops that, you are going to have a problem.  But if you can say, “it’s not as good as The Dark Knight, but I will appreciate it for what it is,” then you will walk away happy.
So is Rises better than The Dark Knight?  No.  To me this “Nolan Batman” trilogy has a trajectory similar to the original Star Wars trilogy: the first one was great, and benefitted from being the “first kiss,” the second was the high point of the series and the third wasn’t as good, but it was a fitting conclusion.
And I will say that any person who thinks that Bane is a knock on Mitt Romney, is delusional.  No, Bane is a dark prediction of the danger posed by the left in America.
And we all know Obama is the Joker. 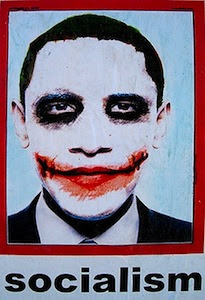 And that is all I can say before I say SPOILER ALERT.