So I tweeted out a link to my last post on the crime in Connecticut and gun control, and I always get curious about who retweets me and one stuck out, a twitterer going by the name PlayBoyMan.  So I was morbidly curious about whether this was a pornbot or what, possibly wondering if I should block this person and I got one of the funnier profiles on the web, telling us for instance that “I’m that dude that loves big boobies.”  Well, yes that only narrows it down to almost every straight male alive.  But it was just something that made me smile and laugh, and not worth a post until I noticed something.  Here’s a clean screenshot. 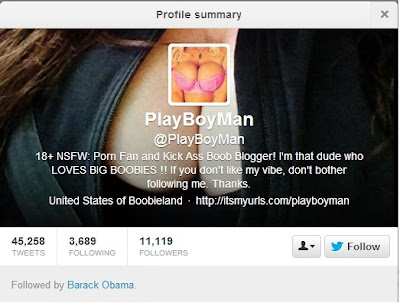 And here’s one, with the important part circled. 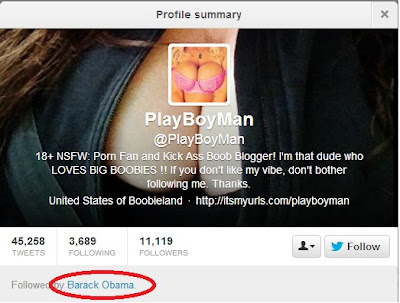 And let me say something else.  In my heart of hearts, I don’t believe that any person supporting me has done any of the above.  But if any of you have, stop it, and if you haven’t don’t start.
Posted by A.W. at 2:16 AM