So a few minutes ago, I got an email from the BS man himself, Bill Schmalfeldt a.k.a. The Liberal Grouch.  Attentive readers know that I have recently invoked Maryland’s general harassment and electronic harassment statute sending him a notice by email to stop his harassment of myself and others, and even posting the notice on my blog.  You can read the notice, here.

Well, he has since violated this statute several times, emailing me once and tweeting to me several times.  He also threatened me yesterday on his radio program, and although that threat was not transmitted to me via email, that is still harassment under the general harassment statute (read here for more information about both statutes).  I will talk more about his threat momentarily in a new post.

But just tonight I get a fresh violation of the statute when he emailed a simple message.  The subject line was DENOUNCE IT OR OWN IT! And it included a screencap of this tweet. 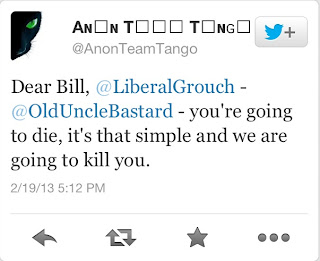 So apparently someone sent him this threat and it is as clear a threat as you are likely to see.  Incidentally, this is how I got that screencap.  The account in question was suspended—and good for Twitter for acting swiftly on that one—but I was able to use an old trick to see the tweet in question anyway.  Specifically I found a couple of people responding to the tweet on my phone app, then I scrolled up to see what they were responding to and the tweet was still there, allowing me to screencap it.

Let’s go through this quickly, people.  First, of course, any threat against Schmalfeldt is wrong.  Down at the bottom of every single post since sometime last summer, I include a disclaimer which includes the following:

But Schmalfeldt likes to play this game a lot, declaring that if you don’t answer his questions or his attacks, he will take that as confirmation of the absolute worst interpretation of events.

Still what do we really know, here?  Okay, who wrote it?  We have no idea.  In fact, I have no reason to believe that Bill Schmalfeldt didn’t write it himself in an effort to garnish sympathy.  After all, he is known to impersonate other people online, having falsely pretended to be both Robert Stacy McCain and the Lonely Conservative in different contexts.  Now, dear reader, I am not presenting you the proof of that just now, so you will have to bear with me and know that the proof is coming and it is fairly definitive.  And of course Neal Rauhauser is famous for his sock-puppets and as they said today on Schmalfeldt’s radio show, Rauhauser and Schmalfeldt are “buddies.”


But let’s pretend that it is from a third party who is genuinely angry at him.  Well, the twitter handle is suggestive of its source.  The presence of “anon” in it suggests a connection to anonymous.  So does the use of the cat-like avatar, which is associated with @Shoq a prominent liberal twitterer, as @Shoq himself acknowledged:

.@liberalgrouch So now stranahan is using my avatar to attack you? What's the logic in that, exactly?
— Shoq Value (@Shoq) February 19, 2013

And notice that this time apparently Schmalfeldt is blaming Lee Stranahan for this death threat.  Indeed as I am writing this post, Robert McCain wrote me to tell me he received the same email.  I suspect others did as well.

Anyway, taken at face value, this actually suggests that anonymous is involved.  Of course we should be extremely reluctant to take it at face value, but Anonymous has several reasons to be angry at Schmalfeldt.  First, he is associated with Neal Rauhauser whom several anons have claimed to be a federal informant.  I do not know if that is true or not, but if they believe it is true, that is a reason why they would hate him.  Also, Anonymous has a reputation for really, really hating child molesters and child pornographers and according to Mark Singer, Bill Schmalfeldt’s associate Brett Kimberlin had an underage girl he referred to as his “girlfriend.”  And Schmalfeldt has angered people openly associated with Anonymous in the past by going after Lee’s wife particularly in attacking Lee and his wife for losing their daughter in childbirth.  Read the tweets in this post.  Notice that one is from a writer who is presenting himself as a member of Anonymous and saying, “Maybe you should be knocked down a few pegs as well. Hm?”  That always struck me at least as a threat to take some kind of hacker action.  And if you actually watched all of Schmalfeldt’s tweets that day, you would see other anonymous types denouncing him.

And as we will see in my next post, just today Schmalfeldt did a skit on his radio show imagining Stranahan’s children being employed as underage prostitutes.  I could very easily imagine Anonymous taking offense at that.

And indeed all of that behavior by Schmalfeldt is vile and I believe it violates Maryland’s harassment statutes.  It is behavior like that which drove Lee Stranahan to file the charges in the first place and it is that kind of behavior that will be on trial if the case goes to court.  And that is the proper way to address this: with a trial in criminal court and not with death threats, not with hacking threats, or with actual violence or even actual unlawful hacking.  I am confident that justice will be done if we take the high road.  That has always been the road I have taken.

Anyway, the irony of it all is that Schmalfeldt, by emailing me after I told him to stop, has himself violated the statute.  There is no legal purpose in emailing to me and expecting me to denounce the inappropriate comment of some random person 1) I don’t know, 2) so far no one can identify, and 3) who did something that I expressly stated I didn’t want to see happen.  I don't need to denounce that comment: it is pre-denounced. That is not a legal purpose and thus goes into my file as the latest example of his harassment of me.

That all being said, I do hope they identify that twitter user and punish that person appropriately, particularly if that is Bill Schmalfeldt or Neal Rauhauser using a sockpuppet account.  And we have no good reason to think they aren’t.

And let me say something else.  In my heart of hearts, I don’t believe that any person supporting me has done any of the above.  But if any of you have, stop it, and if you haven’t don’t start.
Posted by A.W. at 8:09 PM