Meghan McCain Angry at South Carolinians... for Following Her Advice 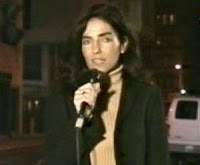 Now let me start by saying that Sanford should have been run out of politics forever, period.  It’s not just that he cheated, though that is bad enough.  It’s also the fact he abandoned his post.  There were several days in which literally no one knew where he was.  On that day he decided that boning his girlfriend was more important than doing his job.  We should make sure his job never gets in the way of that again.

So while I guess he was marginally better than Elizabeth Colbert Busch, it was still a lousy choice.  I joked on twitter the slogan should have been “vote for the louse, it’s important” a throwback to when Edwin Edwards ran for governor against David Duke, with some wags putting up bumper stickers that said, “vote for the crook, it’s important.”  Just as Edwards had no business being in politics, he was better than the other choice (though I don’t want to suggest Ms. Busch was as bad as Duke by a long shot).

Still watching the left screech about it on twitter was delicious, delicious fun.  And none more so than Meghan McCain, who said this:

@carolinemanzo I just can't right now. I am furious. You can lie and cheat and still get sent back to Washington!
— Meghan McCain (@MeghanMcCain) May 8, 2013

And if you look up the tweet, you will see she is plainly talking about the Sanford election.  Of course the most hilarious response to this was from Iowahawk:

@meghanmccain if it wasn't for politicians cheating on their wives, you wouldn't exist.
— David Burge (@iowahawkblog) May 8, 2013

Ouch.  He knew he had a winner of a tweet:

What was the blast radius on that last tweet?
— David Burge (@iowahawkblog) May 8, 2013

Could her entire career be all about daddy issues?  Well, the alternate explanations are no dumber.

But less funny but more damning is the fact that she wrote an editorial on the Sanford scandal back when.  And what was the title of the article? Forgive Mark Sanford.

Yep, read the whole thing.  It is just as bad and hypocritical as it gets.

Could there be any further proof that she just reflexively hates Republicans now?  She asks them to forgive him and they do, and she rages that this means that you can lie and cheat and get back in politics.

And let me say something else.  In my heart of hearts, I don’t believe that any person supporting me has done any of the above.  But if any of you have, stop it, and if you haven’t don’t start.
Posted by A.W. at 12:23 AM