Another Piece of the Zimmerman Narrative Falls Apart (Update: Aceloanche!)

Update: Thanks for another Aceolanche.

This next item presented a dilemma for me.  It comes from the Smoking Gun.  It is incredibly germane to the ongoing Zimmerman story.  But at the same time I have a history with the Smoking Gun.  Early in the Weinergate scandal I watched them dox Mike Stack.  This was part of an overall campaign of intimidation that included making him the first victim of the Kimberlin-connected SWATtings.  All Mike had done was retweet Weiner’s infamous d*ckpic.  Seriously of what relevance was Mike’s past to the congressman’s behavior?  No one deserved what they did to him.

Mike doesn’t like me very much these days, but right and wrong doesn’t change according to how nice a person is to you, and when they did that I put them forever on my “sh*t list.”  No links, no nothing.

So I will be yanking their documents from their servers.

And that is because this document is interesting.  It is the FBI’s report on its discussions with Chris Serino, the lead investigator who passed on filing charges on Zimmerman.  You will be able to read the whole thing in a few minutes, but here are some choice passages:

Serino explained to agents that the local gangs, referred to in the community as “GOONS”, typically dressed in black and wore hoodies.

In other words, Martin was dressed very similarly to the local gangs.  Again, could have been innocent, but there you go.  Which is interesting, but here is the bombshell:

He listed Sgt AUTHOR BARNS, REBECCA VILLENOVE (phonetic), and TREKELL PERKINS as all pressuring him to file charges against ZIMMERMAN after the incident.  Serino did not believe he had enough evidence at the time to file charges.  Serino also stated that Barns is friendly with TRACY MARTIN.

In other words, far from a good old boy conspiracy in favor of Zimmerman, Martin’s family had connections with the cops

Feel free to peruse the documents below the fold.  Use all the usual tricks to enbiggen them. 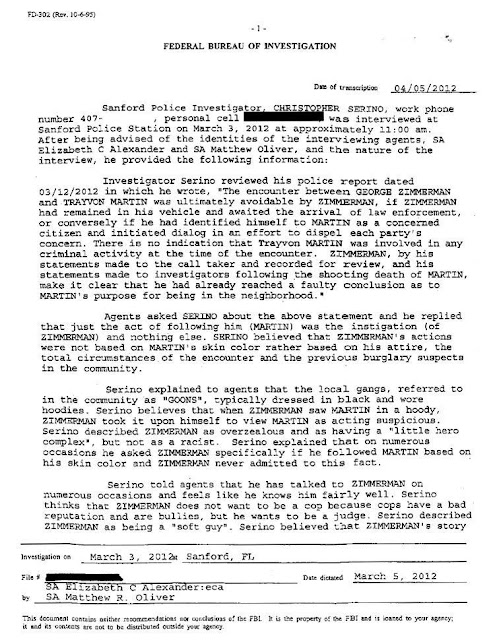 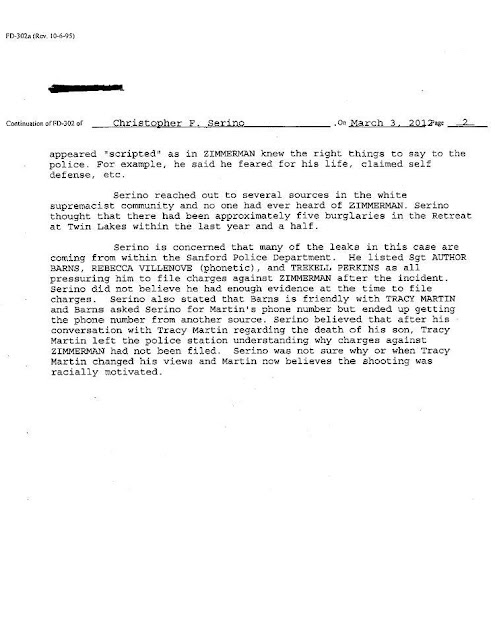 By the way in other news, we have reports of black on Hispanic violence inspired by the Trayvon Martin shooting.  The liberal media should be ashamed of themselves.

Reportedly this occurred in Maryland.  They didn’t dare do it in Virginia because if you try it here you are libel to be shot.  Still if reports are verified, hate crime charges should be filed.  And if not, will Holder intervene?

And let me say something else.  In my heart of hearts, I don’t believe that any person supporting me has done any of the above.  But if any of you have, stop it, and if you haven’t don’t start.
Posted by A.W. at 11:42 PM