Or “A&E Discovers Money is Green” 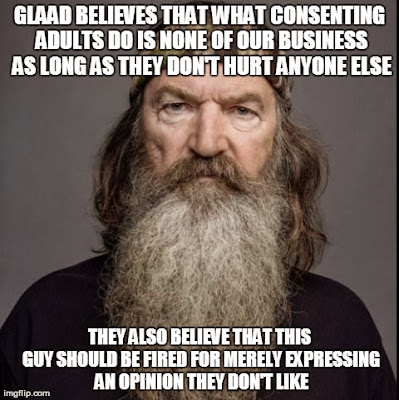 Via Twitchy we hear the good news: A&E has reversed the suspension of Phil Robertson.

As a global media content company, A+E Networks’ core values are centered around creativity, inclusion and mutual respect. We believe it is a privilege for our brands to be invited into people’s home and we operate with a strong sense of integrity and deep commitment to these principals.

That is why we reacted so quickly and strongly to a recent interview with Phil Robertson. While Phil’s comments made in the interview reflect his personal views based on his own beliefs, and his own personal journey, he and his family have publicly stated they regret the “coarse language” he used and the mis-interpretation of his core beliefs based only on the article. He also made it clear he would “never incite or encourage hate.” We at A+E Networks expressed our disappointment with his statements in the article, and reiterate that they are not views we hold.

But Duck Dynasty is not a show about one man’s views. It resonates with a large audience because it is a show about family… a family that America has come to love. As you might have seen in many episodes, they come together to reflect and pray for unity, tolerance and forgiveness. These are three values that we at A+E Networks also feel strongly about.

So after discussions with the Robertson family,...

Let me break in, and add “and after the Robertson family told them that they wouldn’t do the show without Phil.”*

...as well as consulting with numerous advocacy groups, A&E has decided to resume filming Duck Dynasty later this spring with the entire Robertson family.

We will also use this moment to launch a national public service campaign (PSA) promoting unity, tolerance and acceptance among all people, a message that supports our core values as a company, and the values found in Duck Dynasty. These PSAs will air across our entire portfolio.

So they will band-aid the problem by having lots of PSAs about tolerating the people that our cash cow calls sinners.  At least they aren’t doing anything as lame as forcing Phil to go through “sensitivity training.”

Let’s not kid ourselves.  This was as pure a business decision as one can imagine.  Maybe, maybe, the initial decision to suspend was honest.  But the ratings that the show enjoyed made it very difficult to justify killing this golden goose.  I mean it was downright hypocritical for A&E to suspend Phil while running a Duck Dynasty marathon.  And A&E probably realized they faced the threat of a wider boycott.  So free speech in defense of free speech wins one.

* Of course they didn't quite explicitly say that in public, but public statements that they couldn't imagine doing the show without him suggests that this was the ultimatum that they laid down.  But it is technically speculation.

A reasonable reader might also wonder if the rest of the Robertson clan was threatening to break their contract.  But they might not have been.  For instance, it was long rumored that at one point during the run of the show Friends, that the cast went on “strike” seeking higher pay.  They didn’t stop filming the show, but they intentionally did a very bad job of it, the rumor goes, saying each line in a monotone.  That would arguably be a violation of their contracts, too, but it would be a much more difficult matter to prove.  For the Robertsons it might be even easier to be monotone without violating their contract, so maybe they were threatening that, too.  But as noted, this is speculation, albeit educated speculation.

And let me say something else.  In my heart of hearts, I don’t believe that any person supporting me has done any of the above.  But if any of you have, stop it, and if you haven’t don’t start.
Posted by A.W. at 6:07 PM