Here at Allergic to Bull, I don’t typically chase around breaking news.  I don’t try to give you a digest of all the day’s news.  There are many other blogs that do that.  What I try to do is give you an in-depth perspective on whatever randomly interests me, often including something related to current events.  I try to bring a fresh perspective and I try to dig in deep.  A friend, Becca Lower, complained that she didn’t have time to read my material at work and that is sort of the idea.  This is a site you “pick up” when you want to chew on something larger, maybe over a meal, or just before bed.  Maybe you want to read one interesting piece over lunch and so you go to my site.  Stuff like that.

Anyway, last night we learned that a Grand Jury is not going to indict Darren Wilson, which I live-blogged, here.  Riots sprung up immediately afterward, with sad predictability.  And Wilson still faces potential legal challenges.  The Feds are still looking into Civil Rights charges, although that possibility seems remote.  And of course Wilson can be sued for it, too, but I am not sure that will happen.  Judging by what I have seen about the Browns, I doubt that they can afford a long lawsuit—really, bluntly, most people can’t.  Given the failure to even indict, few lawyers looking at this purely from the standpoint of the odds of victory would be likely to operate on a contingency fee.  I could see it being either pro-bono, or “semi-pro-bono” with the possibility of being paid from contingency fees, if a lawyer sees it as a way to become more prominent.  But that seems like the only likely way to see a suit filed, and even then, the fact Wilson won before the Grand Jury suggests he would win before a civil jury, too.

Oh, and here is one other thought.  I wonder if Wilson is thinking of defamation suits against any of the people who made false statements about him?  There is unlikely to be a civil cause of action for perjury in Missouri, but false statements outside of court that harm a person’s reputation is typically handled as defamation.  So if someone said publicly that Darren Wilson shot Michael Brown in the back as he lay on the ground, and it turns out that wasn’t true, Wilson might have a cause of action against that person—although there is still the difficulty of proving that damage was caused by it.

But, missing from all of that analysis is the vital question: was the Grand Jury correct?  Up until now I have ducked the question of Wilson’s guilt or innocence because I haven’t seen the evidence.  I mean that is elementary—don’t judge until you see the evidence (although I tend to trust juries and I presume they usually get it right).  But now we have the evidence.  All of it has been released.  The transcript of the Grand Jury proceedings alone is 4799 pages.  And there are photos, etc.  So I will be reading through that monstrous thing with an eye toward figuring out: is Wilson guilty of any crime, and should he have been indicted?

Just to set things up, first we have the transcripts.  I have uploaded an omnibus, non-OCR version of it, here.  That is essentially a mirror of what the NY Times uploaded here.  And another site uploaded an OCR version here.

I ran OCR on all of them so they are all searchable.  I am doing it this way, because then it will make it easier for you to follow along at home.  I will probably embed them in subsequent posts.

And of course they have released numerous images from the case.  You can see them here, but I am also going to put the photos below.  Embiggen as appropriate.

So that is it for dumping the documents on you in the first post.

I am honestly not even sure yet what to make of all of this material.  I suspect it will read almost like a live blog as I dive through this pile.  And as always I will be open-source, allowing you to make up your own mind and think your own thoughts.  I'll share my opinion, but you will know enough of the basis of my opinion to figure out if I am right.

I mean that was one of the big evidentiary problems in the George Zimmerman case, which I pointed out right from the beginning.  On some of the most crucial points, Zimmerman was the only living witness.  Even if you ignored everything Zimmerman said, you had no other evidence and so you had to make every reasonable presumption in his favor.  For instance, who was the initial aggressor?  Zimmerman says Martin was, and there is no other evidence on the subject.  The presumption of innocence means you can’t just assume Zimmerman threw the first punch, and if you discount Zimmerman’s evidence as “of course he is going to say that,” then you are left with nothing.  I predicted he would never be convicted of anything, and I have proven to be right.

That earlier piece on Zimmerman also gives you a good primer on the law of self-defense in general, at least in Florida, while this piece discusses how Missouri law deals with self-defense and the unique right of a cop to use force to stop a fleeing suspect (in some cases), and this piece discusses (albeit briefly) the standard for indictment.  I don’t mind explaining myself, dear reader, but I am unlikely to repeat myself, so consider that to be your “homework” if you come along with me for this ride.

And other outlets are doing their own analysis as we speak, which is fine.  For instance, this is the Washington Post’s discussion of the autopsy.  This graphic strikes me as analysis, but since forensics is not one of my areas of expertise, it is appreciated. 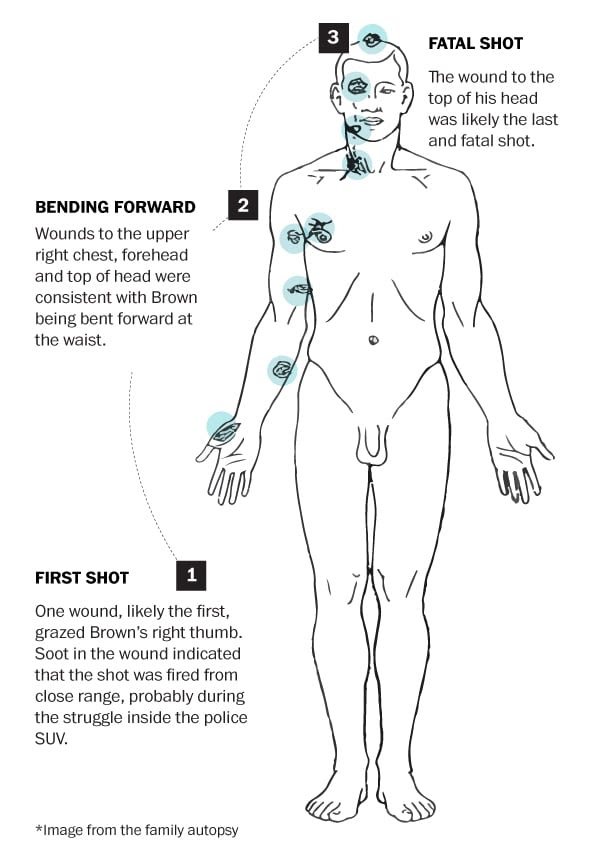 And they have a sort of pictorial illustration of the Wilson/Brown encounter.  I have no idea whether they are right or not, but you can see for yourself, here.  But I will do my own reading.

So keep watching this space, and I expect to eventually read the entire transcript and look at all the evidence in more depth, and to give you my thoughts.  I hope you enjoy it.  I will update this post to include links to the other posts in the series, without formally announcing an update.

And let me say something else.  In my heart of hearts, I don’t believe that any person supporting me has done any of the above.  But if any of you have, stop it, and if you haven’t don’t start.
Posted by A.W. at 11:40 AM