Now in yesterday’s document dump, I showed how the dueling peace order petitions between convicted terrorist Brett Kimberlin and John Norton did not even allege enough elements to justify issuing a temporary, let alone final, peace order, for either side.  And I am watching the Maryland Judiciary Case Search to see what outcome we might have in that case.  I can reveal that John Norton filed a motion for a continuance on the basis of the fact that he was having difficulty finding a lawyer and that it was already denied.  He might in theory raise it again.
But today we are going to look at the criminal complaint against Martin Maher.  If you go onto the Maryland website and look up the case you can see the following: 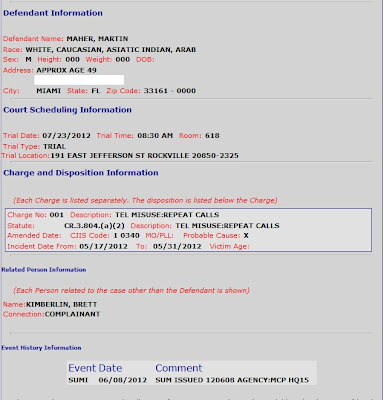 It indicates that he is being charged with Md. Criminal Law Code § 3-804 which reads as follows: