This is the latest post in what I call jokingly call The Kimberlin Saga®.  If you are new to the story, that’s okay! Not everyone reads my blog.  So if you are new to the story, go to this page and you’ll be able to catch up on what has been happening.
Previously I shared with you the criminal complaint against Martin Maher, a Florida resident accused or less of making harassing phone calls to Kimberlin, various people in his family and to his neighbors.  I had been keeping an eye on the case and saw the he had a court date he was supposed to show up for a few weeks ago (probably just an arraignment), but then... nothing happened.  And normally if you miss an arraignment, they put out a warrant for your arrest.
Well, today on the Maryland Judiciary Case Search website we get the disposition of the matter.  The prosecutors have dropped the case: 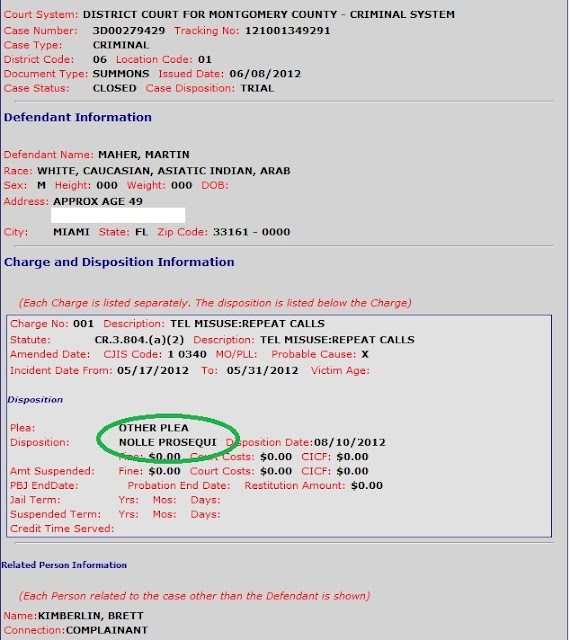 So basically none of his criminal charges have stuck so far.  Now as I noted at the time there was previously several problems in proof involved.  After all, the complaint was filed by a convicted perjurer and document forger (not to mention that he is a convicted terrorist and suspected pedophile—I mean, there is that).
And there was a more basic question, which I raised when reviewing the charges:
And here’s a more basic question: how does Brett Kimberlin know who is on the other end of the phone?  It seems doubtful that he knows Mr. Maher and thereby can recognize his voice.  So how does he know that Maher is making the calls?  How can he be certain it is not his son, or a brother, or a father or a friend?
It seems to me that is the most reckless part of it the complaint.  I don’t see how it is possible for Brett Kimberlin to pretend he knows for certain who made these calls and I don’t see how the state of Maryland can go along with that.  Assuming he is telling the truth—and that means leaving aside the possibility of spoofing the number and the like—it seems like the appropriate next stage is an investigation, not a criminal charge.
This led to Kimberlin’s latest and dumbest toady (who is not getting a link) to argue that caller ID would be sufficient.  Let me respond to that with a picture:

Look, this is addressed to the corpulent dumb@$$ who thinks it is funny to write (paraphrase) “die now!  Oops, my darn Parkisans made me type die instead of bye.”  If you read the quoted passage above carefully I was assuming that they had used some means to identify the number from which the call was made as well as the person who owns that number, such as caller ID or even a police trace.  But just because a call was made from a person’s phone, doesn’t mean that the call was made by that person.
Oy vey, talk about stuck on stupid.  So there is a fundamental problem with proof, here.
But there is something else.  I am going to be accused of teasing when I say this, but remember how I said I thought that something had stopped Kimberlin from filing charges against me, something I couldn’t disclose.  I still can’t disclose it, but I can say that I suspect it might have exerted an influence on these proceedings as well.  His attempts to abuse the Maryland criminal courts may finally have been rendered impotent.
Still all and all, I have to suspect this means that Kimberlin’s latest abuse of the Maryland court system has failed.  And if you want to see him held accountable for his abuse of the courts, hit the freakin' Blogger’s Defense Team donation button on the right.  We could use your help.
---------------------------------------
My wife and I have lost our jobs due to the harassment of convicted terrorist Brett Kimberlin, including an attempt to get us killed and to frame me for a crime carrying a sentence of up to ten years.  I know that claim sounds fantastic, but if you read starting here, you will see absolute proof of these claims using documentary and video evidence.  If you would like to donate and help my wife and I in this time of need, please go to this donation page.  And thank you.
Follow me at Twitter @aaronworthing, mostly for snark and site updates.  And you can purchase my book (or borrow it for free if you have Amazon Prime), Archangel: A Novel of Alternate, Recent History here.  And you can read a little more about my novel, here.
---------------------------------------
Disclaimer:
I have accused some people, particularly Brett Kimberlin, of reprehensible conduct.  In some cases, the conduct is even criminal.  In all cases, the only justice I want is through the appropriate legal process—such as the criminal justice system.  I do not want to see vigilante violence against any person or any threat of such violence.  This kind of conduct is not only morally wrong, but it is counter-productive.
In the particular case of Brett Kimberlin, I do not want you to even contact him.  Do not call him.  Do not write him a letter.  Do not write him an email.  Do not text-message him.  Do not engage in any kind of directed communication.  I say this in part because under Maryland law, that can quickly become harassment and I don’t want that to happen to him.
And for that matter, don’t go on his property.  Don’t sneak around and try to photograph him.  Frankly try not to even be within his field of vision.  Your behavior could quickly cross the line into harassment in that way too (not to mention trespass and other concerns).
And do not contact his organizations, either.  And most of all, leave his family alone.
The only exception to all that is that if you are reporting on this, there is of course nothing wrong with contacting him for things like his official response to any stories you might report.  And even then if he tells you to stop contacting him, obey that request.  As you will see by the time I am done telling my story that this is a key element in making out a harassment claim under Maryland law—that a person asks you to stop and you refuse.
And let me say something else.  In my heart of hearts, I don’t believe that any person supporting me has done any of the above.  But if any of you have, stop it, and if you haven’t don’t start.
Posted by A.W. at 7:15 PM