This is the latest post in what I half-jokingly call The Kimberlin Saga®.  If you are new to the story, that’s okay! Not everyone reads my blog.  The short version is that Kimberlin has been harassing me since last December, his worst conduct being when he attempted to frame me for a crime.  I recognize that this might sound like an incredible claim, but I provide video and documentary evidence of that fact; in other words, you don’t have to believe my word.  You only have to believe your eyes.  So, if you are new to the story, go to this page and you’ll be able to catch up on what has been happening.
Update: Liberal Grouch has threatened me with lawfare.  See here for details.

I have often joked that Twitter is the best engine of self-beclownment ever invented.  Of course this only works if you are actually a clown, but Occupyrebellion is just such a person.  And whoever Sheridan/Occupyrebellion is, she has done just that.
Of course the other day Occupyrebellion threatened Lee Stranahan’s wife—a threat that Joe Brooks documented had started with a monumentally stupid blogger/twitterer, named Liberal Grouch (see here and here), who then carried out Occupyrebellion’s threat.  Update: Liberal Grouch is dishonestly claiming I have said he raped Lee's wife.  Occupyrebellion's precise threat, as demonstrated in all of the links above, was to reveal where Lee lived so that rapists could harm Lee's wife.  Liberal Grouch has done exactly that--reveal where Lee lived.  Thanks to FilmLadd to alerting me to corpulent blogger's latest deception.
For some time I have theorized that Occupyrebellion is actually Brett Kimberlin's sock puppet.  But tonight, she made two things clear.  First, she is not Brett Kimberlin.  And second, she is not in the slightest bit an honest broker trying to find the truth.
Of course one might argue that this was obvious by the fact she was defending Brett Kimberlin’s conduct towards me at all.  I mean how can any person possessed of sanity look at this...
...and not think Kimberlin was an untrustworthy person?  But tonight she really let the mask slip, when she wrote this:

@aaronworthingThere is a thing called phone records & the picture Brett took of Norton leaving in his car.
— Sheridan (@OccupyRebellion) September 3, 2012

Of course the claim that there are phone records have only been backed up by the word of convicted perjurer Brett Kimberlin.  And as for the photograph...
...well, that was a new one.  Was Kimberlin now claiming to have photographed Norton leaving his house on June 15?  For those not following along, Kimberlin filed for a peace order against John Norton claiming he was lurking in the bushes at Kimberlin’s home and taking photographs of him.  Kimberlin then claims that when spotted, Norton jumped in his car, Kimberlin jumped in his, grabbed his daughter and then gave chase (you can read excerpts from the final peace order hearing, here). 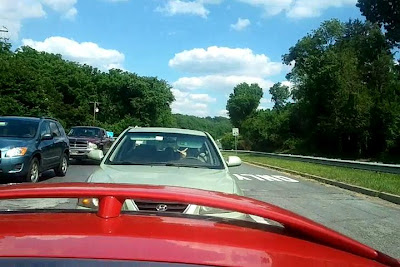 According to Norton however, Kimberlin just suddenly started chasing his car and flipping him off.  I don’t know who is telling the truth, but there is no reasonable doubt that Kimberlin pursued Norton, given that this photograph exists.  Here’s what it looks like (see right):
And in all honesty, I would have never known that was Kimberlin flipping the bird if Kimberlin himself didn’t admit it was him in the photograph, in a document I discussed here.  And of course, Kimberlin has claimed that I was responsible for Norton’s conduct, even though I never even heard of the man until after Kimberlin got his peace order against him.

So up until now I believed this was the only photographic evidence regarding the incident between Norton and KimFhhberlin.  But now suddenly it seemed like Occupyrebellion was talking about a new photograph...
Or was she?
I replied as follows:

Where is that picture? Why didn't #BrettKimberlin produce it in the first hearing? @occupyrebellion
— Aaron Worthing (@AaronWorthing) September 3, 2012

And she replied several times but it became clear over time that Occupyrebellion was actually referring to the very same photograph I showed you a minute ago.  So not a photograph by Kimberlin of Norton, but a photograph of Kimberlin by Norton.  So first she writes:

@aaronworthingThe picture that Seth posted where you lost it against him.
— Sheridan (@OccupyRebellion) September 3, 2012

Now this requires a little translation.  You see I have stopped providing any aid, including legal representation, to Seth Allen.  In Team Kimberlin’s mind the reason why I decided to do this was because he apparently posted that same photograph after seeing Norton post it on the internet.  (Part of the legend is that Norton sent Seth a copy of it, even though there is no evidence of that.  Norton had already posted it publicly on the internet by the time Seth picked up on it.)  While I will not specify the reasons why I cut Seth off, I will say that it had nothing to do with him posting a copy of Norton’s photograph, although I consider it to be a monumentally stupid move on his part.
So she was talking about the same photograph...  and it was plain she had never seen it.  If you aren’t sure I am right, consider this tweet:

@aaronworthingDude, Norton was at Brett's home and then ran and fled in his car.The picture there proves it.
— Sheridan (@OccupyRebellion) September 3, 2012

@aaronworthingThe guy who was just at his home.ASSHOLE.
— Sheridan (@OccupyRebellion) September 3, 2012

But of course the photograph doesn’t prove any of those things.  It only shows you that Brett Kimberlin was driving behind this person and flipping him off.  It suggests pursuit, but it doesn’t tell you anything about what triggered this pursuit.  So it is exceedingly obvious that Occupyrebellion had never even looked at the photograph.
And that tells us several things.  First, Occupyrebellion can’t be Brett Kimberlin.  Kimberlin is pretty shameless in his lying, but even that is a bit much for him.
And second, it shows that Occupyrebellion is not making even the slightest effort to examine evidence for herself.  She is literally writing about documents and photographs she has never seen.
Which suggests in turn she is either an exceedingly devoted fan of Brett Kimberlin to the point that she won’t even look at any objective evidence, or someone is paying her to say these things.  I lean toward the latter theory.
Either way, Occupyrebellion’s mask slipped a little today.  And when I pointed these things out, she did two things.  First, she deleted the offending tweets (but not fast enough, heh).
And second, she complained that I was harassing her:

Do I have to mention that she started this conversation, that she, indeed, she started almost every single conversation I have had with her?
---------------------------------------
My wife and I have lost our jobs due to the harassment of convicted terrorist Brett Kimberlin, including an attempt to get us killed and to frame me for a crime carrying a sentence of up to ten years.  I know that claim sounds fantastic, but if you read starting here, you will see absolute proof of these claims using documentary and video evidence.  If you would like to help in the fight to hold Mr. Kimberlin accountable, please hit the Blogger’s Defense Team button on the right.  And thank you.
Follow me at Twitter @aaronworthing, mostly for snark and site updates.  And you can purchase my book (or borrow it for free if you have Amazon Prime), Archangel: A Novel of Alternate, Recent History here.  And you can read a little more about my novel, here.
---------------------------------------
Disclaimer:
I have accused some people, particularly Brett Kimberlin, of reprehensible conduct.  In some cases, the conduct is even criminal.  In all cases, the only justice I want is through the appropriate legal process—such as the criminal justice system.  I do not want to see vigilante violence against any person or any threat of such violence.  This kind of conduct is not only morally wrong, but it is counter-productive.
In the particular case of Brett Kimberlin, I do not want you to even contact him.  Do not call him.  Do not write him a letter.  Do not write him an email.  Do not text-message him.  Do not engage in any kind of directed communication.  I say this in part because under Maryland law, that can quickly become harassment and I don’t want that to happen to him.
And for that matter, don’t go on his property.  Don’t sneak around and try to photograph him.  Frankly try not to even be within his field of vision.  Your behavior could quickly cross the line into harassment in that way too (not to mention trespass and other concerns).
And do not contact his organizations, either.  And most of all, leave his family alone.
The only exception to all that is that if you are reporting on this, there is of course nothing wrong with contacting him for things like his official response to any stories you might report.  And even then if he tells you to stop contacting him, obey that request.  That this is a key element in making out a harassment claim under Maryland law—that a person asks you to stop and you refuse.
And let me say something else.  In my heart of hearts, I don’t believe that any person supporting me has done any of the above.  But if any of you have, stop it, and if you haven’t don’t start.
Posted by A.W. at 3:23 AM