This is the latest post in what I half-jokingly call The Kimberlin Saga®.  If you are new to the story, that’s okay! Not everyone reads my blog.  The short version is that Kimberlin has been harassing me since last December, his worst conduct being when he attempted to frame me for a crime.  I recognize that this might sound like an incredible claim, but I provide video and documentary evidence of that fact; in other words, you don’t have to believe my word.  You only have to believe your eyes.  So, if you are new to the story, go to this page and you’ll be able to catch up on what has been happening.

Update: Oh my, this is getting comedic.  The Liberal Grouch has emailed me again with even more ALL CAPS.  I think I might have even seen an “eleventy” in there somewhere.  Anyway, most of it is more of the same but a few colorful highlights.
First, he bizarrely claims I said he is faking his disability.  I said no such thing.  I have no doubt he has Parkinson’s but it is obvious that this doesn’t prevent him from blogging and tweeting in any relevant manner.  My post focused on that online behavior and thus doing a disability minstrel show before a court is not likely to elicit sympathy, especially after he threatened to do exactly that.
Second, his email grants me an absolute defense to his charges of defamation.  But first I have to educate this man, who claims to have been a journalist for some three decades, what “actual malice” is in the law.  From NYT v. Sullivan:
with knowledge that it was false or with reckless disregard of whether it was false or not.
So he has to prove that my asserted facts—and not my opinions or conclusions based on acknowledged facts—are written with knowledge that they are false, or with reckless disregard for the truth or falsity of it.  And that is important because he also wrote this:
Seventh.  I deleted the post because I thought better of it after I cooled down.  I knew some dickhead would likely misconstrue it, much in the same way as you right wingers lie about everything else.  The fact that you have a screen cap of it is happenstance.
So he just admitted that we would misunderstand his intent.  And now he is mad at me because... I supposedly misunderstood his intent?  Well, that would seem like a complete defense, wouldn’t it?
And of course the only evidence that I misunderstood him is... his word that I have misunderstood him.  He had no good reason to expose Lee’s address.  And I am allowed to conclude that it was a bullying tactic and he is simply upset at me for calling him on it.
We now resume our original post, as is.
---------------------------------------

So today I get an email from Liberal Grouch (hereafter LG) threatening me with lawfare.  This was all related to a post I wrote here, where I said (updates included):
Of course the other day Occupyrebellion threatened Lee Stranahan’s wife—a threat that Joe Brooks documented had started with a monumentally stupid blogger/twitterer, named Liberal Grouch (see here and here), who then carried out Occupyrebellion’s threat.  Update: Liberal Grouch is dishonestly claiming I have said he raped Lee's wife.  Occupyrebellion's precise threat, as demonstrated in all of the links above, was to reveal where Lee lived so that rapists could harm Lee's wife.  Liberal Grouch has done exactly that--reveal where Lee lived.
The only change I made to that language was in adding the update as indicated.  So here’s the email LG wrote to me, with his email address omitted.
Email From Liberal Grouch to Walker Threatening More Lawfare

So let’s break that down, shall we?  First off, my accusation was based on a series of tweets that Occupy Rebellion and Liberal Grouch—who are in constant contact—tweeted out.  These are documented over at Joe Brooks’ blog here and here.  LG doesn’t deny that he said these things and so he is angry at me for... drawing a conclusion about what he said that he doesn’t like.
The fact is in law you can only be defamed by a false statement of fact.  Well, LG, guess what?  If I have my facts right (and I do), if I am quoting you accurately, then I am allowed to draw any conclusion I want about them.  We are entitled to our own opinions under the First Amendment.  The fact is you wrote this: 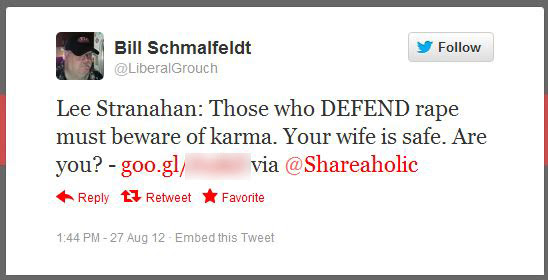 Then you wrote this: 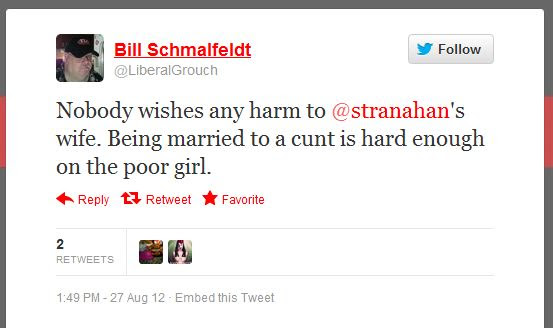 And then Occupyrebellion wrote this. 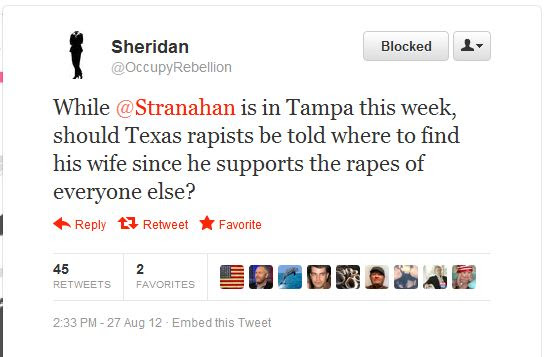 And then, and this is important, you defended Occupyrebellion’s conduct on your blog
as follows:

You deleted that post, LG, but not fast enough.  We have preserved it.
So you got that? You defended Occupyrebellion by saying, “she doesn’t TELL anyone where your wife is.”  And then you go and do precisely that: you tell everyone where his wife is and even suggest that people visit Stranahan’s house. 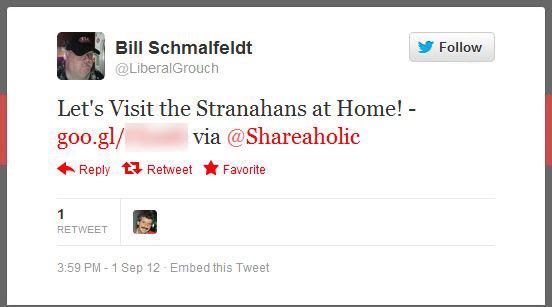