Every Day is Everyone Blog About Brett Kimberlin Day, Including Empty Chair Day

This is the latest post in what I half-jokingly call The Kimberlin Saga®.  If you are new to the story, that’s okay! Not everyone reads my blog.  The short version is that Kimberlin has been harassing me since last December, his worst conduct being when he attempted to frame me for a crime.  I recognize that this might sound like an incredible claim, but I provide video and documentary evidence of that fact; in other words, you don’t have to believe my word.  You only have to believe your eyes.  So, if you are new to the story, go to this page and you’ll be able to catch up on what has been happening.
Hey!  I knew this sign would come in handy. 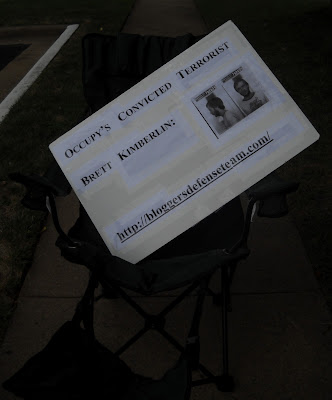 So last week Clint Eastwood made... an unusual appearance at the RNC.  Some say he came off as a doddering old man.  Some nitwits claimed he was channeling his character from Gran Torino, apparently not having seen both that movie and Clint’s speech.  And some think it was softly devastating in the way that a Bob Newhart skit can be.
I myself don’t know, but it certainly can’t help Obama to have people talking about it and watching it.  I mean they are talking about and watching a speech by Clint Eastwood criticizing the President, over and over.  At worst (from Romney's point of view), they’ll think something bad about Eastwood but that seems unlikely to harm Romney.  At best it will hurt the President's poll numbers.
So let’s watch it again, shall we?
Anyway, so yesterday Michelle Malkin’s site Twitchy declared that today was Empty Chair Day, where people were asked to put out empty chairs on their lawns in support of Eastwood’s thesis.  And above, you see my contribution.
You can see more participants, here.
---------------------------------------
My wife and I have lost our jobs due to the harassment of convicted terrorist Brett Kimberlin, including an attempt to get us killed and to frame me for a crime carrying a sentence of up to ten years.  I know that claim sounds fantastic, but if you read starting here, you will see absolute proof of these claims using documentary and video evidence.  If you would like to help in the fight to hold Mr. Kimberlin accountable, please hit the Blogger’s Defense Team button on the right.  And thank you.
Follow me at Twitter @aaronworthing, mostly for snark and site updates.  And you can purchase my book (or borrow it for free if you have Amazon Prime), Archangel: A Novel of Alternate, Recent History here.  And you can read a little more about my novel, here.
---------------------------------------
Disclaimer:
I have accused some people, particularly Brett Kimberlin, of reprehensible conduct.  In some cases, the conduct is even criminal.  In all cases, the only justice I want is through the appropriate legal process—such as the criminal justice system.  I do not want to see vigilante violence against any person or any threat of such violence.  This kind of conduct is not only morally wrong, but it is counter-productive.
In the particular case of Brett Kimberlin, I do not want you to even contact him.  Do not call him.  Do not write him a letter.  Do not write him an email.  Do not text-message him.  Do not engage in any kind of directed communication.  I say this in part because under Maryland law, that can quickly become harassment and I don’t want that to happen to him.
And for that matter, don’t go on his property.  Don’t sneak around and try to photograph him.  Frankly try not to even be within his field of vision.  Your behavior could quickly cross the line into harassment in that way too (not to mention trespass and other concerns).
And do not contact his organizations, either.  And most of all, leave his family alone.
The only exception to all that is that if you are reporting on this, there is of course nothing wrong with contacting him for things like his official response to any stories you might report.  And even then if he tells you to stop contacting him, obey that request.  That this is a key element in making out a harassment claim under Maryland law—that a person asks you to stop and you refuse.
And let me say something else.  In my heart of hearts, I don’t believe that any person supporting me has done any of the above.  But if any of you have, stop it, and if you haven’t don’t start.
Posted by A.W. at 5:09 PM