Via Outside the Beltway, we get this at a New York Times Blog:

I’ve been in touch with Reggie Pierce, the CEO of a company called IP Lasso, which chases down counterfeit web content on behalf of brand-name clients. The National Rifle Association is not a client, but the folks at IP Lasso saw the news splash and decided something felt “a little fishy,” Pierce said. And so they ran some diagnostics. For one thing, nothing in the iTunes listing of the Target Practice app named the National Rifle Association. It just uses the initials – NRA – which Pierce said is a common way counterfeiters get around trademarks. Other NRA-related apps use the full name of the organization. They also feature a logo slightly different from the one on Target Practice. These and other indicators convinced Pierce that NRA: Target Practice is either a hoax aimed at embarrassing the NRA (not that the NRA needs much help) or, more likely, a publicity stunt by the developer of the app (which, to avoid rewarding the company, I will not name here.)

IP Lasso called the CEO of the app developer and the NRA, and both refused to discuss the subject. Pierce was puzzled that the NRA hasn’t disowned the app if in fact it is a hoax. Maybe it’s because the next question would be, “Do you think marketing a shooting app for preschoolers is a good idea right now?” And the NRA doesn’t have an easy answer for that one.

By the way, as I was reading that NY Times article, I saw an advertisement next to it for a game called Deer Drive, which shows bullets being fired at a Deer.  I will note that no simulated living thing is killed in the alleged NRA game.  So the NRA game is less violent than a game advertised on the NY Times actual site.  See here: 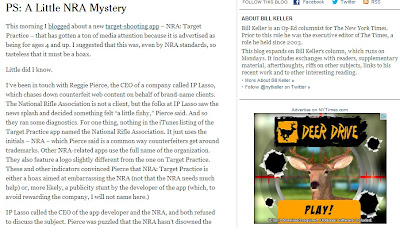 Well, first the theory that it is designed to embarrass the NRA has the flaw of it being only embarrassing in that it is bad.  Yes, we have liberals (and alleged conservatives who get paid mainly to bash conservatives) freaking out about it, but when you look at it, it is not objectively offensive.  We just have morons who don’t know what coffins look like.

And, no, I don’t think the fact it is rated for children as young as four makes it offensive, either.  I don’t consider shooting guns at simulated non-living targets to be something so scary we can’t expose children to.  It would be hard to explain, for instance, why children as young as four shouldn’t be playing this game but Face Raiders on the Nintendo is rated by the ESRB as E for Everyone.  Face Raiders is a free game that comes with the Nintendo 3DS—as in, it is built in to each one—and in it you take pictures of anyone you want, and then shoot them in the face.  Mind you it is also ultimately harmless, goofy fun, but it’s hard to explain why it is okay to do comic violence to friends, family and loved ones, but it is not okay to shoot a target.

And in any case, they have raised the rating to 12 and up.

But let’s break down the “fake” theory.

First, we have this line:

For one thing, nothing in the iTunes listing of the Target Practice app named the National Rifle Association. It just uses the initials – NRA – which Pierce said is a common way counterfeiters get around trademarks.

Well, that’s just not true.  First, it is not in iTunes at all, but the Apple App store.  Here’s a screenshot of the page for the app in an iPhone : 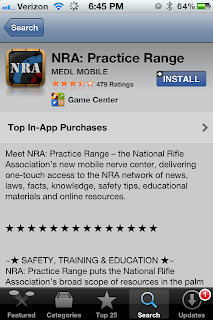 Next he says this: "They also feature a logo slightly different from the one on Target Practice." 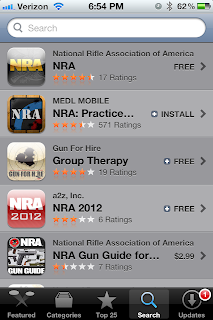 Well, besides getting the name wrong, here’s a screencap from the app store (right).

The one at the top is the NRA’s general app.  The second one is this Practice Range app.  And then at the bottom is the NRA’s official gun guide.  And you notice that the logos are different on all three.  So the logo changes each time.

And if you go to the page on the developer’s website, you see the official classic NRA logo.  Which doesn’t mean it is impossible for it not to be the NRA’s, but I see absolutely no indication it is a hoax.  And my gut says it is.

Which isn’t to say the game is at all worth it, but there you go.

But I asked for an official response on the subject from the NRA.  We’ll see if they respond.

In other related news, they now have a game where you get to simulate assassinating Wayne LaPierre.  Which seems like a poor way to convince him that there is nothing wrong with video game violence, or to convince him he shouldn’t have a gun, but there you go.  Funny how the left always engages in murder fantasies and argues that the right is crazy and scary people with their guns.  I think there’s a word for it: projection.

And let me say something else.  In my heart of hearts, I don’t believe that any person supporting me has done any of the above.  But if any of you have, stop it, and if you haven’t don’t start.
Posted by A.W. at 7:40 PM