George Zimmerman NOT GUILTY!!! (Update: Video and a Creepy Juxtaposition and a Legal Point)

Update (III): Finally, via Legal Insurrection, some decent video.  I’m not going to link to a specific post.  Just go over there and keep scrolling.

They do have a lot more videos.  Expect the next part of this story to be prosecutors being “Nifonged.”  And deservedly so.

Sadly we might also see a civil suit against Zimmerman.  On one hand, he really doesn’t have very many assets in the first place.  Indeed this has probably financially ruined him.  But the family might want to get the moral victory of a finding of liability.  Hopefully the family can finally understand that their son was not murdered, that maybe he did something wrong, or maybe he just made a mistake, but Zimmerman in any case did not murder their kid and shouldn’t be held liable.  But I am not sure we can count on that.

Just a few hours ago, I said that the Zimmerman case was a test of the justice system.  George Zimmerman was the man on trial, but in a real way, we were on trial.

I mean at the risk of bragging, I called this right in the beginning.  I wrote in my first post on the subject, entitled Reasonable Beliefs: Prejudice, Myth and Reality in the Trayvon Martin Shooting (Or “Why Han Solo Had the Right to Shoot Greedo First), when I said this:

And remember folks, the standard of proof is beyond a reasonable doubt.  Bearing some surprising evidence (such as entry wounds in Martin’s back) or a confession, I don’t see how they can get there.

There were two tests before us.  First could this Florida jury put aside emotion and the fear of racial strife and find him not guilty.  That test was passed.  George Zimmerman was found not guilty of all charges.

Now, the question is if the public can accept this finding of not guilty.  Will there be riots?  Will there be vigilante “justice” against George Zimmerman.  Of course time will tell, but I did note something on Twitter:

So maybe all those big talkers on twitter won’t have the nerve to step up.  But then I think maybe the jury should have followed my advice:

If I was on the #ZimmermanTrial jury, I'd wait until 6 a.m. and acquit. Potential rioters will be dead asleep about then.
— Aaron Worthing (@AaronWorthing) July 14, 2013

Next up?  Bar complaints for the prosecutors.  This case shouldn’t have been brought and there are serious allegations of misconduct, of withholding evidence and so on.  Remember Nifong?  I think it is time to make another example of a prosecutor who ignored the law and went with the politics.  Prosecutorial discretion is supposed to be one of the protections against unjust imprisonment.  They had a duty to stand in the way of mob sentiment.  Instead they joined in.

Anyway, enough recriminations for one evening.  Let us celebrate this victory and hope that the people of Florida show the dignity we have a right to expect from us.  And let us celebrate that George Zimmerman's victory.  Because truly it was our victory, too.

Update:  You can watch the verdict as it was recorded live, here.  I cannot embed this video.  What was confusing is they delivered one verdict for both charges at once.

By the way, a spooky confluence.  Seconds before the video ends, do you see what I see?: 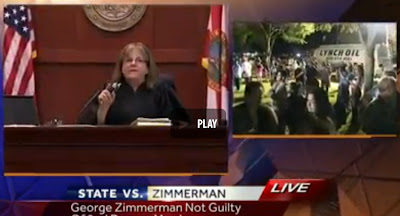 Look closer, on the outside shot (my circle added): 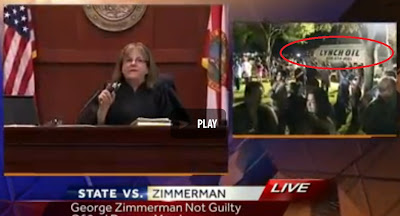 Oy, what a bad juxtaposition.  I presume this was coincidental.

Update (II): This is a subtle but important legal point to be made.  Self-defense law doesn’t require a finding of fault by anyone.  Let me quote myself in a different context:


[T]he guilt or innocence of the person threatening you is not determinative of whether you can kill to defend yourself.

For instance, take a person who is really, really insane.  Like a classic example is a man thinks he is squeezing oranges to make orange juice but in fact he is strangling someone.  The law says in that case that the person is innocent of murder because he literally doesn’t understand what he is doing (but such a person almost certainly will be in a looney bin for the rest of his life).

Now imagine that this person hallucinates that a person is shooting at him and he then picks up a gun and shoots in what he thinks is self-defense.  Again, if he kills a person this way it is not a crime because he is literally so far gone insane he doesn’t understand what he is doing.  So if he is captured, the law says he is not guilty of a crime.  He will, once again, just be sent to a looney bin.

But the fact he would not be held morally responsible for any deaths doesn’t mean you have no right to defend yourself against him.  If he is hallucinating a killer and in shooting at his hallucination he is shooting at you, an innocent bystander, you have the right to pull out your own gun and kill him.  In that case it’s not that the lunatic is a bad person or at all morally culpable.  It’s that he presents you with a situation where your life is in danger and the only way to get out of it safely is to kill him.

This is not to say that fault plays no role in this.  If Zimmerman as the aggressor in the initial fistfight, the law would have imposed a duty to attempt retreat.  But sometimes there isn’t anyone properly described to be the aggressor.  Dan Collins imagines a plausible scenario where he might have been the aggressor (thanks for the linkage!), but he might not have been.  He might have himself reasonably feared that Zimmerman was about to attack him and, as the law allows, he decided to attack pre-emptively.  That doesn’t make him the aggressor, and it doesn’t make Zimmerman the aggressor either.  In that scenario, where Martin strikes Zimmerman first, acting in reasonable self-defense, there is no aggressor, just two people defending themselves against the other.  It could have been cascading self-defense.

Which is not to say Martin made not mistakes.  If he struck first, he made a mistake.  He should have run, he should have called the police.  I don’t say this to beat him up, but maybe if we want to squeeze any good out of the evil of the fact that this young man is dead, we need to realize that any person can be armed and govern ourselves accordingly.

And let me say something else.  In my heart of hearts, I don’t believe that any person supporting me has done any of the above.  But if any of you have, stop it, and if you haven’t don’t start.
Posted by A.W. at 10:45 PM