I Blame Instapundit for This Debacle!

So yesterday in an act of almost sublime screwing around, instapundit bragged that he was the first person to search for the term “international cat speculators.”

And here’s an interesting thing about Blogger.  One of the thing it tells me is what someone else searched for in order to get to my site.  So if you searched on Google for “facepalm” and my blog came up and you clicked on the link, I would know it.  Mind you, I wouldn’t know who searched for it.  You are still safely anonymous in that respect, but still I couldn’t help but chuckle when I saw this. 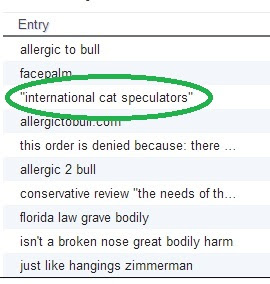 That means someone searched for “international cat speculators” and then somehow my blog came up (maybe because of the blogroll on the side?), and this made someone click on my blog.

As a great man once said: heh.

And let me say something else.  In my heart of hearts, I don’t believe that any person supporting me has done any of the above.  But if any of you have, stop it, and if you haven’t don’t start.
Posted by A.W. at 12:28 AM