...and Convicted Terrorist Brett Kimberlin Obtains Peace Order Against John Norton
Yes, apparently it was a split decision today in the District Court of Maryland.  I explained to you yesterday why neither man deserved a peace order, but apparently instead those wacky district court judges gave both men a peace order.  Here are the screencaps: 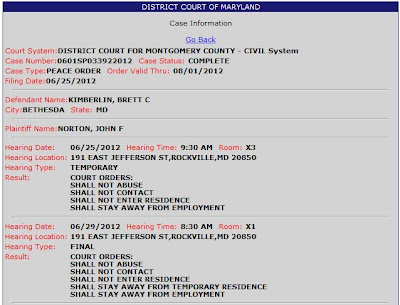 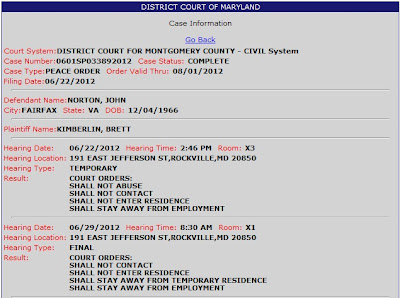 Which frankly makes no sense at all.  This is only further confirmation that the district court system in Montgomery County, Maryland, is incapable of properly administering the peace order statute.  In my case, they have now twice found that protected speech is “harassment” when it plainly is not, and they have just today issued two peace orders that shouldn’t have been issued.
Why is this the case?  In my opinion, it has to do with the appellate system.  Every single appeal from these decisions is de novo.  For non-lawyers, that means a whole new trial occurs in the circuit court—almost as if the prior case never even happened.  So that takes out of the system an important element of accountability.  The district court judges seem to think, “so what if I get it wrong? They’ll get a new trial in the circuit court.”  And when all you are telling a person to do is to stay away from a person’s residence, I suppose that isn’t such a bad thing; but when you are infringing on a person’s First Amendment rights, it is.
The other thing is this.  In a normal appeal—such as that to the Supreme Court—the higher court has to review the conduct of the lower court.  You don’t get an appeal just because you feel like it; you have to point at some kind of mistake made by the lower court, necessitating that the higher court scrutinize the lower court’s decisions.  They review the record, the decisions and the reasoning of the lower court and find errors and then publicly correct them.  See e.g. Anderson v. Bessemer City, (1985) (“Accordingly, we hold that the Fourth Circuit erred in denying petitioner relief under Title VII.”)  It is alleged that lower court judges consider a reversal a humiliating event, that they attempt to avoid.  And if an error is made, then the district court has to run the case again—creating an inefficiency that the court doesn’t desire.  Dockets tend to be chronically overcrowded, and no one wants to see that crowding exacerbated by having to try the same case once, twice, three times because the lower court didn’t get it right the first time.  It makes courts more careful about making errors in the first place, and more eager to learn from their mistakes when exposed.  It forces them to be better, in my opinion.

In addition to that, the looser rules in the district court feed into this problem.  There is barely any discovery to speak of, so that one could know there is absolute proof of a fact, but it can be hard to obtain evidence of it if you don’t personally own the evidence.  Further, any time that it is claimed that expression constitutes a violation of the law, each and every statement needs to be proven.  In the case of spoken words, that are not recorded by any means, the exact words must be required.  For instance Brett Kimberlin was repeatedly allowed in District Court to claim I promised to continue harassing him.  And then in Circuit Court he was no longer allowed to get away with that in this exchange:
THE WITNESS [Kimerlin]: Well, the judge told him if he kept objecting, he would have the sheriff remove him.
Mr. Walker -- When the hearing ended, Mr. Walker followed me outside the courtroom and told me that he was going to continue harassing me. He --
MR. BOURS: Judge, could you instruct Mr. Kimberlin at least to give quotes of what was said as opposed to characterizations?
THE WITNESS: I heard Mr. -- okay. I’ll say what I heard.
THE COURT: You need to say exactly what he said. Don’t characterize it.
THE WITNESS: Okay. Mr. Walker said that he was going to continue harassing me.
THE COURT: Well, I don’t think he said he was going to continue harassing you. He didn’t speak in those terms. What did he say? Quote him.
THE WITNESS: That’s what I recall. Then as we --
THE COURT: You’re not understanding me. Mr. Walker did not come out of that courtroom and say he is going to continue -- he said, quote, “I” what?
Well, in fact what I said was that “I am going to continue to tell the truth about you.”  Likewise if the statement was recorded or written, then present the recording or the writing.  Print it out!  And read it!  Examine the best evidence of what was said, which is rarely some person’s memory of it, and the system will  better withstand the abuse of a pathological liar like Brett Kimberlin.
Those kinds of simple reforms would correct what is plainly to me a broken system in Maryland that treads on people’s constitutional rights with alarming frequency.  And if that requires me to argue that an injustice was done to a man who has attempted to frame me for a crime and get my wife killed, so be it.  Truth is truth.
---------------------------------------
My wife and I have lost our jobs due to the harassment of convicted terrorist Brett Kimberlin, including an attempt to get us killed and to frame me for a crime carrying a sentence of up to ten years.  I know that claim sound fantastic, but if you read starting here, you will see absolute proof of these claims using documentary and video evidence.  If you would like to donate and help my wife and I in this time of need, please go to this donation page or use the PayPal buttons on the right.  And thank you.
Follow me at Twitter @aaronworthing, mostly for snark and site updates.  And you can purchase my book (or borrow it for free if you have Amazon Prime), Archangel: A Novel of Alternate, Recent History here.  And you can read a little more about my novel, here.
---------------------------------------
Disclaimer:
I have accused some people, particularly Brett Kimberlin, of reprehensible conduct.  In some cases, the conduct is even criminal.  In all cases, the only justice I want is through the appropriate legal process—such as the criminal justice system.  I do not want to see vigilante violence against any person or any threat of such violence.  This kind of conduct is not only morally wrong, but it is counter-productive.
In the particular case of Brett Kimberlin, I do not want you to even contact him.  Do not call him.  Do not write him a letter.  Do not write him an email.  Do not text-message him.  Do not engage in any kind of directed communication.  I say this in part because under Maryland law, that can quickly become harassment and I don’t want that to happen to him.
And for that matter, don’t go on his property.  Don’t sneak around and try to photograph him.  Frankly try not to even been within his field of vision.  Your behavior could quickly cross the line into harassment in that way too (not to mention trespass and other concerns).
And do not contact his organizations, either.  And most of all, leave his family alone.
The only exception to all that is that if you are reporting on this, there is of course nothing wrong with contacting him for things like his official response to any stories you might report.  And even then if he tells you to stop contacting him, obey that request.  As you will see by the time I am done telling my story that this is a key element in making out a harassment claim under Maryland law—that a person asks you to stop and you refuse.
And let me say something else.  In my heart of hearts, I don’t believe that any person supporting me has done any of the above.  But if any of you have, stop it, and if you haven’t don’t start.
Posted by A.W. at 9:55 PM