This is the latest post in what I call jokingly call The Kimberlin Saga®.  If you are new to the story, that’s okay! Not everyone reads my blog.  So if you are new to the story, go to this page and you’ll be able to catch up on what has been happening.
So tonight over at Stacy McCain’s site they have published emails sent by Neal Rauhauser to various government officials including Congresswoman Sandy Adams.  You might remember that Neal Rauhauser has been described by convicted domestic terrorist Brett Kimberlin as an “associate” of his, and that Rauhauser described himself as a representative of Kimberlin’s and Brad Freidman’s Velvet Revolution.  More positively, you might remember that Ms. Adams actually released a statement about my SWATting on the night of the event, which was very cool of her.  She is asking for your help in her current race, an effort I heartily endorse.
Anyway, I’ll leave most of the response to others, but let me make a few points.  In this deluded and factually-challenged email by Rauhauser, he suggests that he believes that Brandon Darby—a Breitbart-connected blogger—is the SWATter.  So you might be interested to know what I, a victim of this crime, think of that accusation.
Now I have to confine what I am about to say to the prior three calls.  I have been asked by investigators not to speak about what I know about the fourth SWATting call.  But they didn’t say I couldn’t express an opinion about the prior three.  Rauhauser makes much of the fact my call hasn’t been released, but this is a different jurisdiction with different preferences about how to go about this stuff.
But with that caveat, let me say it again.  I do not believe that Brandon Darby SWATted any of the prior victims.  Again I can’t say anything about my own call, either to support him or not.  And I will stress that this is my belief based on listening to Darby’s voice and listening to the first three SWATting recordings, but I do not believe it was him.
Anyway, so I will let other people pick apart the crazy in the rest of the emails, but I wanted to focus on the part about my life.  Let’s count the factual inaccuracies, shall we:
Aaron Walker, Manassas Virginia, June 25th
Walker was outed as the operator of the Islamophobic Everyone Draw Mohammed blog...
Except the blog was actually a free-speech, anti-terrorism blog.  And phobic?  Is he denying that there were people threating artists with death if they dared to depict Mohammed—even in the most benign way?  Or does he just think this is not a problem?
…January of 2012, he was arrested for assaulting Brett Kimberlin on January 9th at a contempt hearing for Seth Allen,...
Oy and the factual inaccuracies are coming in fast and furious, here.  First, I was not arrested on January 9, or on any other date, in connection to Kimberlin’s assault charge.  Second, you all know by now I didn’t assault Brett Kimberlin and his claims that I did assault him are contradicted by video evidence.  And third, Kimberlin didn’t even allege that I assaulted him at the hearing—it was supposedly after.
...whom either he or Frey had been guiding to smear Kimberlin.
Which isn’t true, either.  In case it isn’t obvious, no one controls Seth Allen.
…He was arrested again for a peace order violation in June,...
Except 1) I didn’t violate the peace order, and 2) I was arrested in May.  You should know that, Neal.  You were there.
…and this triggered the massive “Everyone Blog About Brett Kimberlin” smear, publicly announced by Lee Stranahan and promoted by Ali Akbar/National Bloggers Club.
Which is really amazing, because this is proof that Lee and Ali are time-travelers.  I mean how else can you explain how my arrest on May 29 on Kimberlin’s second set of false charges would cause Lee to announce several weeks before that May 25th was Everyone Blog About Brett Kimberlin Day?  I mean it’s either that or Rauhauser is an idiot who cannot keep track of events he actually lived through.
Or so I thought, until exclusive to this website, we got this photograph of Lee and Ali together with their special DeLorean... 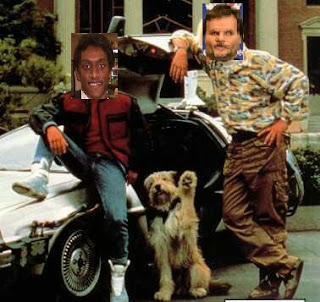 ...oh my God.
Joking aside, while I can’t say for sure who committed the SWATting or who ordered it, ask yourself this: who has a proven history of trying to use law enforcement as a cat’s paw, by falsely accusing me of committing crimes, as a tool of harassment against me?
And who has placed myself and my wife in danger in the past?  And who just that day had his attempts to harass me by other means come up impotent?  Not saying he did it or ordered it, but he’s a very logical suspect.
---------------------------------------
My wife and I have lost our jobs due to the harassment of convicted terrorist Brett Kimberlin, including an attempt to get us killed and to frame me for a crime carrying a sentence of up to ten years.  I know that claim sounds fantastic, but if you read starting here, you will see absolute proof of these claims using documentary and video evidence.  If you would like to donate and help my wife and I in this time of need, please go to this donation page.  And thank you.
Follow me at Twitter @aaronworthing, mostly for snark and site updates.  And you can purchase my book (or borrow it for free if you have Amazon Prime), Archangel: A Novel of Alternate, Recent History here.  And you can read a little more about my novel, here.
---------------------------------------
Disclaimer:
I have accused some people, particularly Brett Kimberlin, of reprehensible conduct.  In some cases, the conduct is even criminal.  In all cases, the only justice I want is through the appropriate legal process—such as the criminal justice system.  I do not want to see vigilante violence against any person or any threat of such violence.  This kind of conduct is not only morally wrong, but it is counter-productive.
In the particular case of Brett Kimberlin, I do not want you to even contact him.  Do not call him.  Do not write him a letter.  Do not write him an email.  Do not text-message him.  Do not engage in any kind of directed communication.  I say this in part because under Maryland law, that can quickly become harassment and I don’t want that to happen to him.
And for that matter, don’t go on his property.  Don’t sneak around and try to photograph him.  Frankly try not to even be within his field of vision.  Your behavior could quickly cross the line into harassment in that way too (not to mention trespass and other concerns).
And do not contact his organizations, either.  And most of all, leave his family alone.
The only exception to all that is that if you are reporting on this, there is of course nothing wrong with contacting him for things like his official response to any stories you might report.  And even then if he tells you to stop contacting him, obey that request.  As you will see by the time I am done telling my story that this is a key element in making out a harassment claim under Maryland law—that a person asks you to stop and you refuse.
And let me say something else.  In my heart of hearts, I don’t believe that any person supporting me has done any of the above.  But if any of you have, stop it, and if you haven’t don’t start.
Posted by A.W. at 12:44 AM