So Why is the Pedophile Brett Kimberlin Mad at Us, Really?

Well, let’s see if we can find a common thread among his enemies, shall we?  First up, we have James O’Keefe III.  Unlike a lot of his targets, he hasn’t been hitting back very much, but he was an early target of Kimberlin’s as I mentioned here.

And why was that?  On its face it was because Brett Kimberlin was offended that James O’Keefe recorded people without their consent.  But hidden camera investigations occur all the time.  Why did he focus on this one?  Here watch it again:

Well, well, what do you know, James O’Keefe was attacking ACORN for being willing not just to help a prostitute and her pimp, not just to set up a brothel, but an underage brothel.

Next up, we have Patrick “Patterico” Frey.  And Patrick Frey is pretty openly and vociferously anti-pedophilia too.  Yes, yes, just about every sane people is anti-pedophilia, but Patrick’s office was directly involved in trying to extradite Roman Polanski to serve out his sentence for pedophilia and while Patrick was not directly involved in that, he did take that time to hammer Polanski on his blog.  To give one example, you can look here and here.

Next up we have Lee Stranahan.  Lee was one of the Breitbart journalists who brought the story of the rapes at occupy rallies to light, including one that was pedophilic in nature.

And then there is me, Aaron Walker.  I ran a blog called Everyone Draw Mohammed.  This was an anti-terrorism, pro-free-speech protest.  The simple logic was this: the terrorists threatened to kill anyone who drew Mohammed and particularly the creators of South Park.  We those of us who joined in the protest were more or less saying, “well, if you are going to kill anyone who draws Mohammed, you’ll have to kill, me too.”

The idea frankly, was to call their bluff.  And they were bluffing.  Or more precisely, they were hoping that only a few people would dare to draw Mohammed, so they would have a manageable number to terrorize and kill.  But instead thousands of people did.  Over seven hundred people did at my site, and over a hundred thousand people did on facebook. 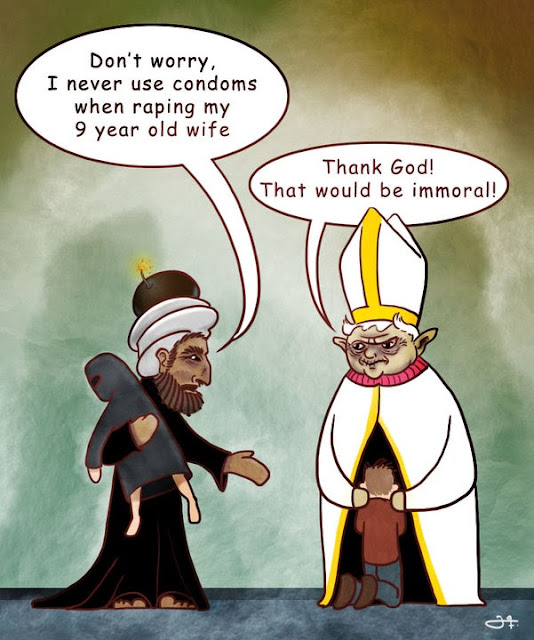 ...which would deeply offend my Catholic in-laws, and this... 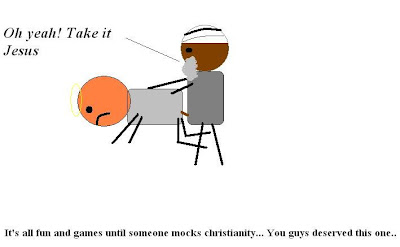 ...which was drawn by a Muslim man to throw down the gauntlet, so to speak.  I guess he thought I would be offended and therefore wouldn’t publish it.  I was offended and did publish it.

Now the cartoons that did appear on my site ran a gamut of themes, but one particularly popular topic was Mohammed and Aisha, which was alluded to above.  According to Islamic tradition, Aisha was Mohammed’s fourth wife and his most favorite.  He married her when she was six yeas old; he consummated the marriage when she was nine.

So you got a lot of cartoons that used the “pedobear” meme involving mohammed.  Here’s a sampling: 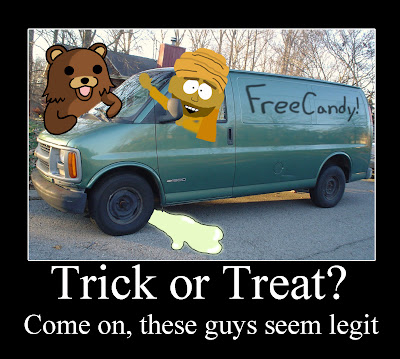 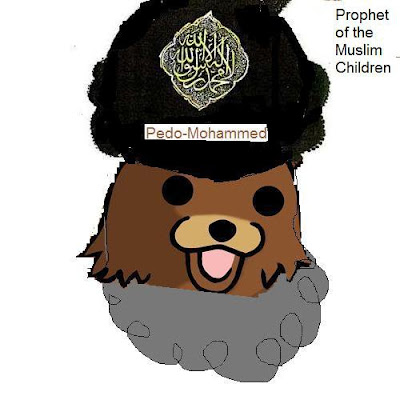 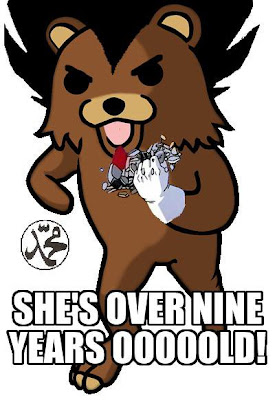 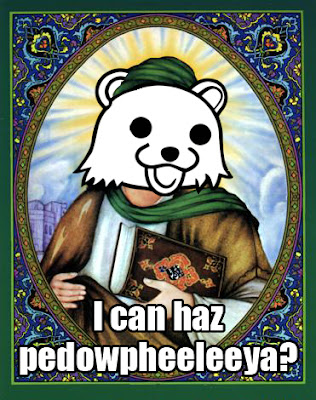 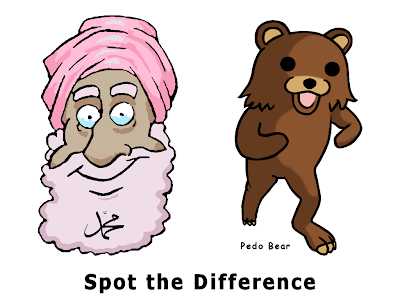 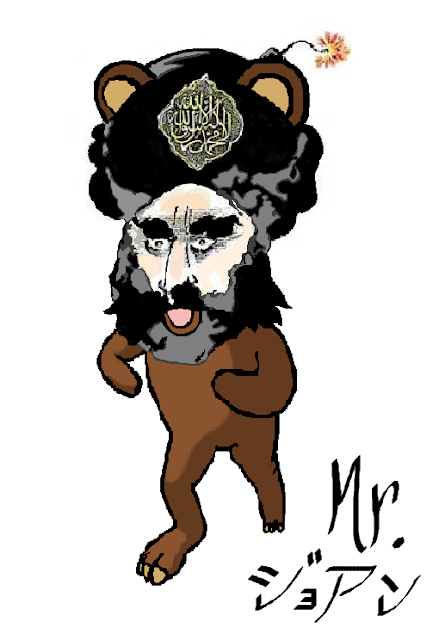 Some were subtle, such as the use of the slightly smaller “ghost” in this Pac-man themed cartoon.

Some were in French: 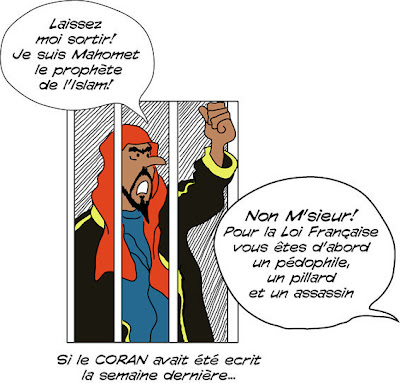 Some were not so subtle: 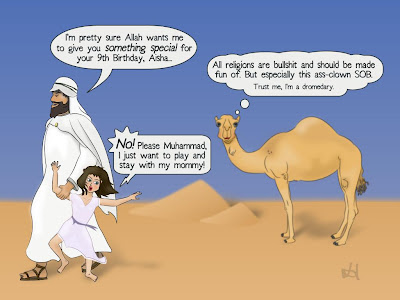 And some were just plain heartbreaking: 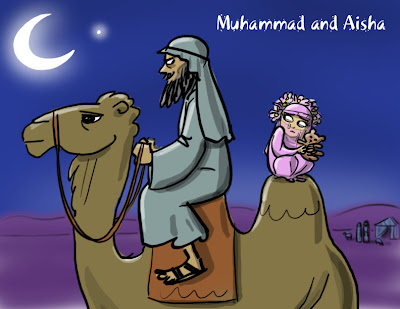 (Seriously, you need to enlarge this one for the full effect.)

But in each, the unmistakable message was to attack, mock, criticize Mohammed for being a pedophile.

And for that matter, in the blog I talked extensively about Mohammed’s pedophilia.  Now let me point out that I don’t assume that every Muslim approves of Mohammed’s behavior or would emulate it.  In fact I assume they just kind of ignore it, rationalize it away, so that this plainly vile behavior is condemned, but they somehow believe Mohammed is God’s most important prophet.  They may follow a man whose personal life I consider to be appalling, but they don’t believe in doing what he does.

But there a lot of people for whom this is a sticking point.  I even told people the story of a Pakistani Muslim who told me that the story of Aisha broke his faith.  He could no longer believe in a faith founded by a pedophile.  And my point wasn’t to bash Islam but to use it as a practical example of how the right to speak freely about a faith was vital to the right to choose one’s own faith.  In other words, freedom of religious speech was vital to the right of religious freedom.

But in the process, I made no bones about the fact I didn’t like pedophilia.

My friend Dustin, who was a particular target of their ire, also helped with the Everyone Draw Mohammed Blog.

And then we reach Mandy Nagy, who wrote one of the earliest pieces that set this thing in motion.  In it, she mentioned the suspicions that Brett Kimberlin was a pedophile, although she didn’t put it that bluntly.

The point I am getting at here, is that it seems like one of the safest ways to anger Brett Kimberlin is to say something bad about pedophiles.  And let’s remember what I said about Kimberlin trying to use music to promote acceptance of pedophila:

What these songs in fact represent is the effort of a pedophile to try to make his behavior seem more normal.  We know that pedophiles think of their desires as an “orientation” much like being gay (much to the chagrin of gay people who feel that the pedophiles are harming their movement).  The pedophiles think these are normal desires and the child is not actually harmed by having sexual relations.  So he was hoping to have a hit album that includes songs designed to make that taboo sound more normal, to move things a little closer to the day when we become “tolerant” and decide that sex between a forty year old and a ten year old is no more wrong than two dudes having sex.

Of course it is a fools dream.  In reality the “debate” about sex with underage children is best encapsulated by the ending moments of the classic episode of South Park dealing with NAMBLA, when a member of NAMBLA makes soaring speeches about freedom and tolerance, only for Kyle to say, “but dude, you have sex with children!” over and over again to shut him down.  (And if you wanted to watch it for yourself, for free, go here)....

This is the real reason why, in his twisted mind, he is the good guy.  He just wants to find love... with really young girls.  And everyone who tried to stop his love are the bad guys, people who are intolerant of his “sexual orientation.”  He claimed Julia Scyphers was harassing him and she ended up dead with him as the lead suspect in a murder-for-hire scheme.  And John and I have helped expose the pedophilia he committed against T. Kimberlin just when he thought he was free and clear from what he did.  So he is lashing out, impotently.

So if he thinks pedophilia is good, that it is just an orientation like being gay, then necessarily all of those things we did would be evil to him.  It would be evil to attack ACORN for being willing to create an underage brothel, for Patrick’s office to try to imprison Roman Polanski for anally raping a child, for I and various participants at my site to attack Mohammed as a pedophile, and for Mandy Nagy to call attention to the suspicions that Brett’s bombings were motivated ultimately by a pedophilic love of a girl named Debbie Barton.

This also makes T. Kimberlin evil in his mind, too.  He has rationalized what he did to her.  He told himself he didn’t hurt her, that she even enjoyed it.  He probably thinks in truth that she doesn’t really have a problem with the way he used her, that she is just using this “intolerant” law—meaning intolerant of pedophiles—as a weapon against him.

But of course it isn’t that way.  T. Kimberlin has come to recognize that to have seduced her at such an age was abusive and she is in terror that Brett Kimberlin will abuse other girls—including potentially his own daughters—the same way.  Because despite having an uncommonly tough life, including having lived with a sociopath for about fifteen years now, T. Kimberlin is actually extremely normal.  And she is hoping she can break away from Brett and give her daughters the most normal existence possible.

And let me say something else.  In my heart of hearts, I don’t believe that any person supporting me has done any of the above.  But if any of you have, stop it, and if you haven’t don’t start.
Posted by A.W. at 6:59 AM