This is the second in a series of posts that I introduced, here.
In the first part of this story, I provided an introduction and then talked a little about the law of peace orders in Maryland.  In this part we will talk about the peace order that Brett Kimberlin filed on May 19, 2012.  I had mentioned it before but I didn’t take the time for the true line by line fisking it deserved.
But it is worth looking at a screencap from when the peace order was put into place. 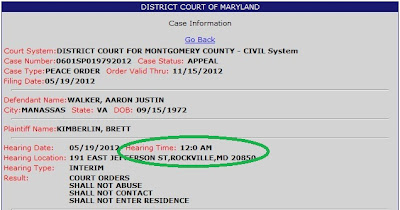 As you can see, this was filed at midnight on Saturday, May 19.  Which if they are doing it right, means that he left for the commissioner’s office on Friday evening.  And what, pray tell, motivated him to run from his mother’s basement (where he lives) to the commissioner’s office so late on a Friday evening?
Perhaps he witnessed the horror that was...  my latest Friday Frivolity post... and if you look at my twitter feed, it was mainly just the usual stuff.  It’s hard to understand why anything I wrote gave him a sudden sense of urgency.  In fact one might suspect he went there at that time in the hopes of finding someone less vigilant than normal.  Perish the thought.
So let’s fisk this sucker, starting with the handwritten parts.  First he writes (his words will be in red and italics, just to keep things easier to follow):
Mr. Walker has engaged in a course of conduct that alarms and seriously annoys me by filing false criminal charges that were quickly dismissed...
Of course the problem with that is two-fold.  First, I filed those charges against him on April 17.  He filed this petition on May 19, and as I explained in the last part, it can only apply to conduct in the last thirty days, so...  that would be April 19-through May 19, and thus the conduct falls completely outside the peace order statute.
But more fundamentally than that, you can’t file a peace order to prevent a person from filing a criminal charge, and he knows that.  Judge Eric Johnson of the Circuit Court told him that in the April 11 hearing, saying:
If you notice, it does not say here [in the peace order statute] that the respondent may not file a lawsuit, may not press criminal charges. Those things are not prohibited. First of all, they cannot be prohibited. A person has a right if they want to -- because we’re not here to litigate the lawsuit. I know you understand what its contents are, but that civil law case may or may not stand on its own merit even if this proceeding never occurred.
So he was told by Judge Eric Johnson that filing criminal charges was not covered by the peace order statute.  Indeed if they were, I would have gotten a peace order against him last January and put an end to this mess.
Alas, Kimberlin goes on:
...retaliating against me for filing a prior peace order...
No, it was because he perjured himself repeatedly and falsified evidence in an attempt to frame me for a crime and imprison me up to ten years, and it’s not retaliation: it’s seeking justice.
...threatening to “make me pay”...
Yes, and given that I had sued him for damages at that point for your outrageous conduct—as well as his co-conspirators, Neal Rauhauser and Ron Brynaert—that was nothing more than a statement of confidence that sooner or later I would get justice in a court as was indicated by the very tweets he is selectively quoting from.
I was responding to the internet persona Breitbart Unmasked’s (who is still working hard to unmask a dead man, apparently) question of why I still cared about Kimberlin and I said replied twice: 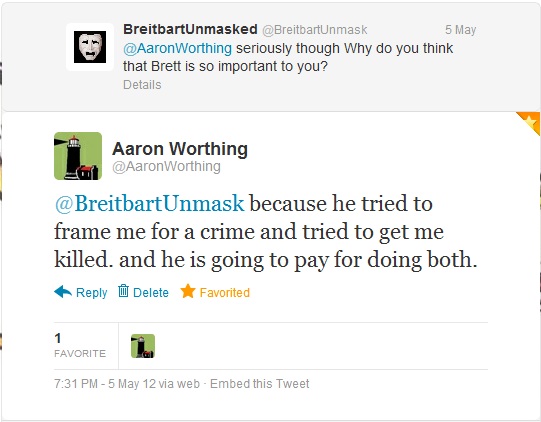